Ellen DeGeneres Breaks Her Silence on Workplace Misconduct Scandal, Says She Felt Confused and Hurt Above All 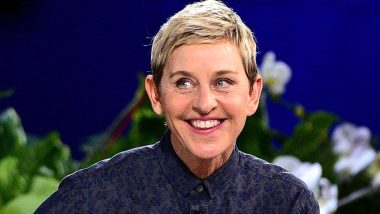 American comedian and TV host Ellen DeGeneres recently addressed her daytime show's alleged workplace misconduct scandal that was investigated by Warner Bros. last summer. According to Fox News, on Thursday DeGeneres while appearing on a news show said that she felt the press coverage surrounding the accusations were misogynistic and orchestrated. She claimed, "I have to say, if nobody else is saying it, it was really interesting because I'm a woman, and it did feel very misogynistic." Ellen DeGeneres Opens Up About Ending Her Talk Show in 2022, Says ‘Always Knew 19 Would Be My Last’.

When asked if the Emmy-winner felt "cancelled," she responded, "I mean, I really don't understand it. I still don't understand it. It was too orchestrated. It was too coordinated." DeGeneres said she felt confused and hurt above all. Talking about the allegations she said, "For me to read in the press about a toxic work environment when all I've ever heard from every guest that comes on the show is what a happy atmosphere this is and what a happy place is." Ellen DeGeneres Announces Her Talk Show Will End in 2022 After Running for 19 Years.

DeGeneres noted that there are 255 employees that make up her show so she doesn't know "how I could have known" the alleged behaviour was going on. DeGeneres further elaborated on the subject and continued, "There are a lot of different buildings. Unless I literally stayed here until the last person goes home at night, it is my name on the show so clearly it affects me and I might have to be the one to stand up and say, 'This can't be tolerated.' But I do wish someone came up to me and said, 'Hey, this is something you should know about."

The comedian said that she is not bulletproof and added, "No, I do not have thick skin. I'm extremely sensitive to the point that this is not healthy how sensitive I am. When something is coming back at me that I know is not true, I guess I could take one or two of those shots but four months in a row took a toll on me." She told the Hollywood Reporter on Wednesday that her long-running 'Ellen DeGeneres Show' will be ending in 2022 after 19 seasons.