George Shapiro Dies at 91, Producer and Manager of Seinfeld and Kaufman Passes Away

Renowned Hollywood talent manager George Shapiro, who helped Andy Kaufman put together the massive NBC hit Seinfeld and a slew of other projects has died at his home in Beverly Hills. 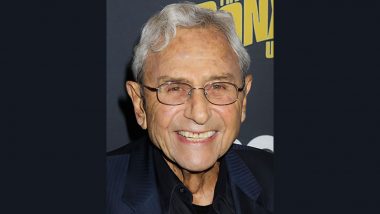 Renowned Hollywood talent manager George Shapiro, who helped Andy Kaufman put together the massive NBC hit Seinfeld and a slew of other projects has died at his home in Beverly Hills. He was 91. Shapiro, producer and longtime manager of Jerry Seinfeld, Carl Reiner, Andy Kaufman and other comedy stars, was also a co-founder and partner of Shapiro/West Associates, a successful talent management firm, according to Variety. Ray Liotta Dies at 67: Martin Scorsese, Kevin Costner and Robert De Niro Mourn the Demise of the Beloved Actor.

Shapiro most recently served as executive producer of Jerry Seinfeld's Crackle/Netflix sitcom "Comedians in Cars Getting Coffee." Shapiro had a vibrant personality and was recognised for his long connections with customers as well as his infectious enthusiasm for the entertainment industry. Shapiro's family remarked, "Shapiro's love of laughter and appreciation for those who inspire it helped him develop a career in comedy as an unashamed booster of comic performers and comedy writers." Ray Liotta Dies at 67: Priyanka Chopra, Ranveer Singh and Other Bollywood Celebs Mourn the Demise of the Goodfellas Star.

Danny De Vito, who co-starred with Andy Kaufman in the popular ABC and NBC sitcom "Taxi" from 1978 to 1983, recalls Shapiro's presence during the production of the Paramount Television series. De Vito would eventually play Shapiro in Jim Carrey's 1999 Kaufman biopic "Man On the Moon." "George was one of the nicest people I'd ever met. During the 'Taxi' days, we got to see that cheerful face every Friday night". De Vito said in a statement that he "never missed a show." "Rest in peace, brother," as reported by Variety.

Shapiro's contribution to the comedy industry for more than 50 years was recognised in a statement from the National Comedy Center in Jamestown, N.Y., where he served on the inaugural advisory board. "He was a firm believer in our mission to celebrate and preserve comedy's history," said Journey Gunderson, the centre's executive director. He grew up in the Bronx and had a long friendship with West, who was a boyhood friend. Shapiro was Reiner's nephew through marriage to Reiner's wife, Estelle Reiner. The HBO documentary "The Bronx, USA" depicted Shapiro's early years in 2019.

Shapiro was an executive producer for the Showtime special 'Andy Kaufman at Carnegie Hall' and the classic ABC programme 'The Andy Kaufman Special'for Kaufman. Elayne Boosler's 'Broadway Baby' for Showtime, Jerry Seinfeld's 'Up Confidential for HBO, and HBO's animated 'The 2000 Year Old Man, with Mel Brooks and Carl Reiner recreating their famed buddy act, were among the specials he put together, according to Variety. George has always been a supporter of programmes related to his hometown. He directed and produced 'The Bronx Boys,' a 2003 documentary about Shapiro and West's elementary school buddies from P.S. 80. Ten years later, PBS broadcasted "The Bronx Boys Still Playing at 80." "If You're Not in the Obit, Eat Breakfast," an HBO documentary on elderly comedians, included Shapiro, Reiner, Brooks, and others in 2017.