Taking to her Instagram handle, Jacqueline shared a picture of herself where she could be seen dressed up as a sultry mermaid princess for Halloween 2021. 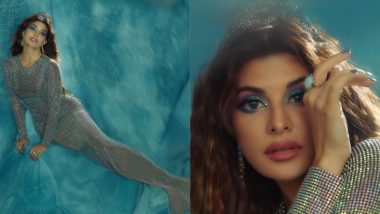 New Delhi, October 31: Where celebrities are sporting their best spookiest looks for Halloween's night, here's Bollywood diva Jacqueline Fernandez who took the social media ablaze by channelling her inner mermaid princess for the occasion. Taking to her Instagram handle, Jacqueline shared a picture of herself where she could be seen dressed up as a sultry mermaid princess for Halloween 2021. Shilpa Shetty Kundra Looks Spook-Tacular as Zombie Bride for Halloween 2021, Video Goes Viral.

The Kick actor donned a silver body-hugging gown with a tiara. Keeping the fashion game on, Jacqueline accessorised her look with some finger rings, a pair of long bling earrings and a silver tiara. Keeping her curly long tresses open, she amplified the glam quotient with sparkly glitter along with purple blush on her cheeks, black eyeliner streaks, mascara-laden eyelashes, blue, silver and purple eyeshadows, blue lens and filled-in eyebrows.

Her well-fitted gown also had a small trail that was styled as a mermaid's tail to increase the oomph of the entire look.

Sharing the pictures, Jacqueline wrote, "Happy Halloween everyone!! I hope you stay your craziest, weirdest self!!" Her alluring post garnered more than eight lakh likes with a string of heartfelt comments from fans and celebrity followers.

Meanwhile, on the work front, Jacqueline was recently seen in the horror-comedy film, Bhoot Police. She has multiple projects in the pipeline including Kick 2, Bachchan Pandey, and Ram Setu. She will also be featured in a special project with 365 Days actor Michele Morrone.