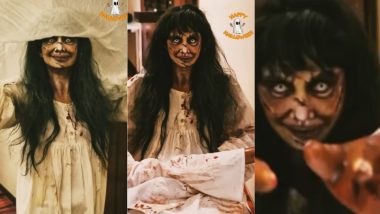 New Delhi, October 31: Bollywood diva Shilpa Shetty channelled her spooky side as she turned out as a 'zombie bride' from Halloween 2021. Taking to her Instagram handle, Shilpa shared a reel video of herself in which she could be seen revealing her extremely spooky look for this year's Halloween. Hailey Bieber Slaying in Four Different Britney Spears Looks For 2021 Halloween (View Pics).

Shilpa could be seen unveiling her face from her 'zombie bride' look that made her unrecognisable. Sharing the video, Shilpa wrote, "Happy HaLLowEen... #halloween2021 #boo." The post went viral within a few minutes of being posted and accumulated thousands of likes on the photo-sharing platform. Angelina Jolie Dressed in Giraffe Onesie from Pre-Pandemic Halloween Party Goes Viral, View Pic!

Meanwhile, on the work front, Shilpa was recently seen as a judge at the reality show Super Dancer 4, alongside Geeta Kapur and Anurag Basu. The reality show had its last episode aired on 9 October 2021.