The much-awaited 'Aquaman' sequel has finally got its title and it is -- 'Aquaman and the Lost Kingdom'. Filmmaker James Wan, who is helming the sequel, revealed on Thursday as the film enters pre-production. 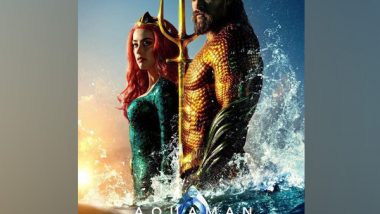 Washington [US], June 11 (ANI): The much-awaited 'Aquaman' sequel has finally got its title and it is -- 'Aquaman and the Lost Kingdom'. Filmmaker James Wan, who is helming the sequel, revealed on Thursday as the film enters pre-production.

The upcoming project stars Jason Momoa as Aquaman, with Amber Heard expected to return as Mera and Patrick Wilson back as Orm, as per The Hollywood Reporter.

The Warner Bros studio took the first step toward the 'Aquaman' sequel in February 2019, by bringing back David Leslie Johnson-McGoldrick to write the script. The film will be produced by original director James Wan and Peter Safran.

'Aquaman' over-performed for Warner Bros., coming in above pre-release projections after launching with USD 68.7 million in its opening weekend in North America. The title gained momentum in subsequent weeks and hit USD 330 million in North America and USD 805 million internationally, led by nearly USD 300 million in China.

It's currently the 20th-highest worldwide grosser of all time. Johnson-McGoldrick teamed with Will Beall on the 'Aquaman' script, from a story by Beall, Geoff Johns, and Wan. Johnson-McGoldrick began working on the screenplay three years ago after reading 'Aquaman' comic books while on the set of Wan's 'The Conjuring 2'.

In addition to 'Aquaman and the Lost Kingdom', Warners has other movies slated for a big release, including 'The Suicide Squad', 'The Batman', 'The Flash', and Warners' and New Line's 'Black Adam' and 'Shazam! Fury of the Gods'. 'Blue Beetle', 'Batgirl', 'Supergirl', 'Green Lantern Corps', 'Static Shock' and 'Wonder Woman 3' are also in the works.