Get latest articles and stories on Entertainment at LatestLY. The trailer of Karan Johar's fun chat show 'Koffee with Karan Season 7' is finally out and the 'Kuch Kuch Hota Hai' director is all geared up to get back on the coffee couch with his quirky questions and hilarious rapid-fire rounds. 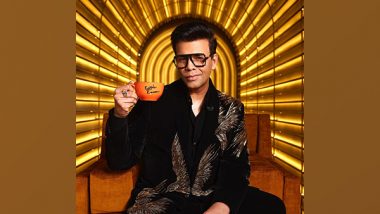 Mumbai (Maharashtra), July 2 (ANI): The trailer of Karan Johar's fun chat show 'Koffee with Karan Season 7' is finally out and the 'Kuch Kuch Hota Hai' director is all geared up to get back on the coffee couch with his quirky questions and hilarious rapid-fire rounds.

The 'Ae Dil Hai Mushkil' director's chat show will start streaming on July 7, 2022, and will be dropping new episodes every Thursday, exclusively on Disney+ Hotstar.

The fun-packed trailer of season 7 shows some clippings from the upcoming episodes, south actor Samantha Ruth Prabhu will be marking her debut on the show along with actor Akshay Kumar.

"You're the reason for unhappy marriages," the 'Family Man 2' actor said to Johar in the trailer.

Whereas the 'Liger' star cast Ananya Panday and Vijay Deverkonda will also join the coffee couch hand-in-hand, this marks the 'Arjun Reddy' actor's debut on the show.

Other than that, Bollywood divas and best friends Jahnvi and Sara are going to entertain the audience with their fun chat with the 'Bombay Velvet' actor.

The 'Rocky aur Rani ki Prem Kahani' couple Ranveer and Alia add on the spice element in the trailer and raise the excitement to a new extent.

Apart from that the 'JugJugg Jeeyo' father-son duo, Varun Dhawan and Anil Kapoor, the 'Kabir Singh' couple Shahid-Kiara, and 'Heropanti' couple Tiger Shroff and Kriti Sanon are also going to be part of the upcoming season.

"I'm excited to be back with Koffee With Karan, for an all-new season, keeping up the promise of being the personal celebrity hotspot for over 18 years. This will be a season of all-out candor for a galaxy of stars where there are no brakes to pull. If you want to catch the conversations before they become the next day's headlines, Disney+ Hotstar is your go-to destination every Thursday." Johar stated.

Meanwhile, the Dharma Productions owner will be making a comeback as a director with his much-awaited project 'Rocky aur Rani ki Prem Kahani' with Ranveer Singh and Alia Bhatt in the lead roles. The film is slated to release on the occasion of Valentine's Day 2023. (ANI)