Highlighting how he is changing strategy in choosing projects now, Varun mentioned: "I am trying to work with filmmakers who will give me creative challenges. I have done commercial potboilers. I have built an emotional connection with my audience. Now that the audience is evolving, it is time that I also evolve, focusing on experimental content." 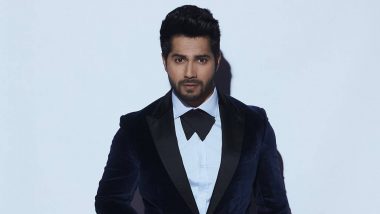 While in his 10 years of career in Bollywood, he is known for being part of all the mainstream commercial potboilers and pop-corn entertainment, Varun Dhawan is also the actor who worked in films like Badlapur, October and now working with filmmakers like Nitesh Tiwari and Amar Kaushik. The actor shares how he has reached the stage of his career where he is choosing to work with filmmakers who would give him challenges to grow as a creative person. Jugjugg Jeeyo Song The Punjaabban: Varun Dhawan, Kiara Advani, Neetu Kapoor and Anil Kapoor Groove to This Peppy Wedding Anthem (Watch Video).

In a conversation with IANS, keeping the pressure of his latest released Jug Jugg Jeeyo aside, the actor opens up. Varun told IANS: "When you are part of a big-budget commercial film, it is only natural that the pressure is huge and we all want to play safe to recover the investment. But that at times could stop my growth as an actor, as a performer. When I worked with Soojit da in October and Sriram sir in Badlapur they helped me to discover a side of me as an actor that I did not know; it was challenging and they pushed me to extract something different."

"When we are working on a content-heavy film, we take the liberty of doing more experimental work. If it is a comparatively smaller budget film, the risk is lesser. I am always trying to balance that." "Having said that, I am also aware that if I am becoming part of any film, chances are, that critics and trade analysts would think it's a commercial film and they would expect a certain number from it. Not all films are for number games, some are small, beautiful heartwarming. October was that," said the actor.

Recently Varun finished shooting for Stree famed director Amar Kaushik's upcoming directorial Bhediya that is produced by Dinesh Vijan and it is also starring Kriti Sanon. "We shot the film in the North-Eastern part of India and it is a unique story. We shot in some beautiful unseen locations and it is also a VFX-heavy film. It is not a small budget film but surely a very different one. Then I will start shooting with Nitesh Tiwari for Bawaal," he said. Varun Dhawan and Maniesh Paul Gatecrash Wedding in Delhi During Jugjugg Jeeyo Promotions!

Highlighting how he is changing strategy in choosing projects now, Varun mentioned: "I am trying to work with filmmakers who will give me creative challenges. I have done commercial potboilers. I have built an emotional connection with my audience. Now that the audience is evolving, it is time that I also evolve, focusing on experimental content. I think these days, audiences come to the theatre for directors, or to watch the combination of director-actor. With Amar and Nitesh sir, I would also like to create such an equation."

(The above story first appeared on LatestLY on Jul 02, 2022 07:53 PM IST. For more news and updates on politics, world, sports, entertainment and lifestyle, log on to our website latestly.com).