Entertainment News | 'Lord of the Rings' Anime Movie in the Works 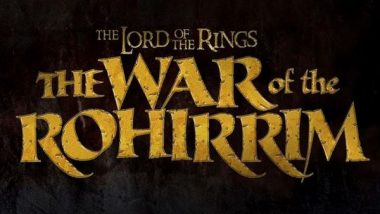 Poster of 'The Lord of the Rings: The War of the Rohirrim' (Image source: Instagram)

As per Variety, veteran anime filmmaker Kenji Kamiyama, who helmed Netflix's 'Ultraman' anime series, will direct the film from a screenplay by Jeffrey Addiss and Will Matthews. Joseph Chou is producing the upcoming project.

The stand-alone feature will depict the bloody saga behind Helm's Deep, the fortress depicted in 'The Lord of the Rings: The Two Towers', and the man in whose honour it's named: Helm Hammerhand, the legendary King of Rohan who spent much of his reign locked in a prolonged and costly war.

While the filmmaking team is new to 'The Lord of the Rings' movie franchise, the project is intended to be connected to director Peter Jackson's six Middle Earth films based on the books of J.R.R. Tolkien.

'The Lord of the Rings: The War of the Rohirrim' is not, however, connected to Amazon's gargantuan 'The Lord of the Rings' series that is deep into production in New Zealand. That project is set in the Second Age of Middle Earth, millennia before the events of the feature films; Helm Hammerhand's reign, by contrast, unfolded roughly 260 years before the 'LOTR' movies.

With Amazon's series looming, New Line and Warner Animation are fast-tracking their feature, with animation at Sola Entertainment and voice casting already underway. The six Middle Earth features have grossed over USD 5.8 billion worldwide for Warner Bros., and it would appear the studio is not content ceding its claim to Tolkien's creative territory to Amazon.