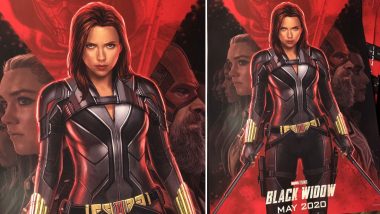 The much-awaited Marvel superhero film 'Black Widow' which was slated for release on November 6, is likely to get its release delayed, according to Variety. The studio is also known to explore various release options for Pixar's animated film 'Soul' which was scheduled for a November 20 release. According to Variety, the studio is also considering releasing 'Soul' on its online video streaming platform Disney Plus. Black Widow Director Confirms Scarlett Johansson Will Exit MCU after Her Solo Movie and Florence Pugh Will Take On the Mantle

This comes days after Warner Bros. announced that the release of 'Wonder Woman 1984' has been shifted to late December from early September. Around 70 per cent of the cinema halls in America have reopened after COVID induced shutdown but many are facing problems in attracting audiences. Black Widow: Scarlett Johansson Says Her Standalone Marvel Movie Is All About Self-Forgiveness

The release of Scarlett Johansson starrer 'Black Widow' has been delayed several times since its original release date in May.