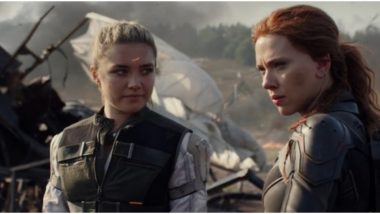 Scarlett Johansson is returning to MCU one last time with her standalone Black Widow movie. After fans bid her a very emotional goodbye in Avengers: Endgame, they will have an opportunity to see her kick some ass for one more time but nothing beyond that assures, director Cate Shortland, While the movie will be a fitting tribute to her character, Marvel certainly has some plans to introduce a new Black Widow in its list of upcoming movies. Johansson's fellow co-star, Florence Pugh will, in fact, take on her mantle and carry forward her legacy. Black Widow Trailer: From Iron Man 2 to Black Panther, Fans Find Interesting Callbacks in Scarlett Johansson's Superhero Film.

Director Cate Shortland in her in new interaction with Empire revealed Scarlett will hand over her baton to Pugh in the movie and the latter will be introduced as the new Black Widow in MCU. "We didn't know how great Florence Pugh. We knew she would be great, but we didn't know how great. Scarlett is so gracious, like, 'Oh, I'm handing her the baton.' So it's going to propel another female storyline," Shortland said in her interview.

Revealing her thoughts on Natasha not getting a funeral in Endgame, Shortland said her character will instead complete the arc in the upcoming movie. "In Endgame, the fans were upset that Natasha did not have a funeral. Whereas Scarlett, when I spoke to her about it, said Natasha wouldn't have wanted a funeral. She's too private, and anyway, people don't really know who she is. So what we did in this film was allow the ending to be the grief the individuals felt, rather than a big public outpouring. I think that's a fitting ending for her," she revealed. Oscars 2020: Scarlett Johansson and Florence Pugh had their Black Widow Reunion on the Academy Awards Red Carpet (View Pics).

Pugh plays Yelena Belova, a sister-figure to Romanoff who was also trained to be a Black Widow.  Besides Florence and Scarlett, the movie also stars David Harbour, O.T. Fagbenle, William Hurt, Ray Winstone and Rachel Weisz. Speaking about her fellow Avengers who may have a cameo in the movie, only Robert Downey Jr's Iron Man is rumoured to have a special appearance. The film was expected to hit the screens in May 2020 but was delayed after the coronavirus pandemic. It's now expected to release in November.

(The above story first appeared on LatestLY on Jul 07, 2020 03:43 PM IST. For more news and updates on politics, world, sports, entertainment and lifestyle, log on to our website latestly.com).