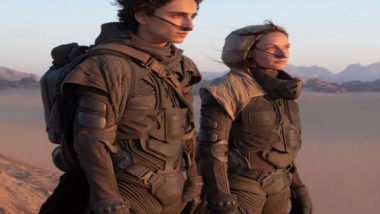 A still from the trailer (Image Source: You Tube)

According to the trailer the upcoming flick promises to be an edge-of-the-seat thriller with a storyline that revolves around the story of a mythic and emotionally charged hero Paul Atreides.

The hero, a brilliant and gifted young man born into a great destiny beyond his understanding must travel to the most dangerous planet in the universe to ensure the future of his family and his people.

As malevolent forces explode into conflict over the planet's exclusive supply of the most precious resource in existence - a commodity capable of unlocking humanity's greatest potential - only those who can conquer their fear will survive.

The movie, which will have its world premiere at the Venice Film Festival, is based on Frank Herbert's seminal science fiction bestseller of the same name.

The mysterious trailer promises powerful performances by all the actors, enthralling dialogues, captivating visuals, and an engaging story. From powerful background music that complements the pace of the trailer to some intense performances, the trailer features it all, making it safe to say that fans are in for a visual treat.

Coincidentally, the Denis Villeneuve directorial 'Dune's' new release date that is October 22, 2021, falls on the same day as 'The French Dispatch', both films star Chalamet. This is the latest delay for 'Dune', helmed by Denis Villeneuve. The hotly-anticipated film was originally set for December 18, 2020, before being punted nearly a year to 2021 due to the COVID-19 pandemic.

In late 2020, Warner Bros. made the bombshell decision to release its entire 2021 slate of films simultaneously in theatres and on HBO Max for a limited time.

These films, including upcoming releases like 'The Suicide Squad' and 'The Matrix 4' are still expected to follow that release plan. (ANI)