As per Page Six, the 41-year-old singer was cooking in a Versace robe when he won the award on Sunday. 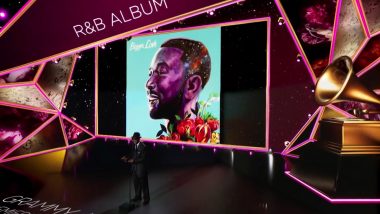 American singer-songwriter John Legend took home the award for 'Bigger Love' in the best R&B album category at the 2021 Grammys. As per Page Six, the 41-year-old singer was cooking in a Versace robe when he won the award on Sunday. His wife Chrissy Teigen shared the at-home celebration on her Instagram Stories, asking him, "John, you just won R&B Album of the Year, how are you going to celebrate?" "Mincing garlic," the singer replied while dancing in front of a cutting board in his designer loungewear. Grammys 2021: The Biggest Snubs and Surprises of the 63rd Grammy Awards.

The singer also posted his own video of the moment, writing, "I love you, @chrissyteigen! Thank you for inspiring me every single day. And thanks for the outstanding cacio e pepe I was mincing garlic for." The 63rd Annual Grammy Awards were delayed owing to the ongoing Covid-19 pandemic. The annual show shifted from its original January 31 broadcast to March 14. The ceremony honours musical artists, compositions, and albums across 84 categories. Comedian and talk show host Trevor Noah is hosting this year's Grammys. It marks Noah's first time hosting the award ceremony. Grammys 2021: Billie Eilish’s ‘Everything I Wanted’ Bags Record of the Year Grammy Award.

Though usually held at the Staples Center, this year's festivities will take place at the Los Angeles Convention Center. Keeping in mind the pandemic, the event is said to be cut down to size and will have mainly a home viewing audience. The artists will be seen performing as The Recording Academy announced its list of performers. However, they will be seen performing at multiple stages as opposed to one stage at a designated spot. Since the pandemic, a number of awards shows have been postponed and later revamped due to COVID-19 restrictions.