Get latest articles and stories on India at LatestLY. After Manik Saha was sworn in as the new Chief Minister of Tripura, the Bharatiya Janata Party (BJP) has once again taken recourse to its old mantra to beat anti-incumbency by changing the face in a poll-bound state. 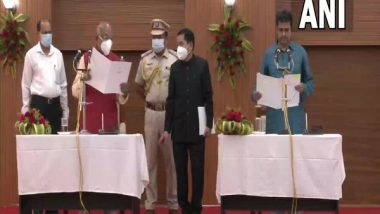 Agartala (Tripura) [India], May 15 (ANI): After Manik Saha was sworn in as the new Chief Minister of Tripura, the Bharatiya Janata Party (BJP) has once again taken recourse to its old mantra to beat anti-incumbency by changing the face in a poll-bound state.

Before Tripura, the BJP had scripted change in leadership in Gujarat, Karnataka and Uttarakhand. While the change of the face in Uttarakhand was done ahead of the elections, Gujarat is heading for year-end polls. Tripura and Karnataka are heading for elections next year.

Tripura unit of the BJP leaders was surprised with the choice of Manik Saha as chief minister as he was elected to the Rajya Sabha from the lone seat barely two months ago.

Saha in 2016 had quit Congress and joined the BJP and his elevation to the party can be seen as a strong hand to fight against the Communist Party of India (Marxist), which ruled the state for more than three decades.

He was made party chief in 2020 and elected to Rajya Sabha in March this year.

Saha is also the fourth former Congress leader from the Northeast to become CM in the region after joining the BJP.

The change in state leadership also shows the infighting within the state unit, which could have affected the BJP in the upcoming Assembly elections.

A professor of dental surgery, Dr Saha will be expected to steer the party to victory in the Assembly polls amid a multi-cornered contest in the northeastern state where Trinamool Congress is also seeking to emerge as a key player.

Dr Saha, 69, was named as the leader of the BJP legislature party hours after the resignation of Biplab Deb.

The sudden political development came as a surprise to the people of the state.

He is known to have engaged in development work at the grassroots and assisting the needy.

Born in 1953 in a business family of Agartala, Saha has an active interest in sports. He has been an athlete in his college days and has been president of the Tripura Cricket Association.

Saha on Sunday took oath as the chief minister of the state on Sunday at Raj Bhawan in Agartala.

Union Minister Bhupender Yadav and party general secretary Vinod Tawde were in Agartala as central observers on the day of the leadership transition in the state.

The BJP legislative party meeting on Saturday had elected Saha as the legislature party leader in the presence of the Central observers. The BJP decided on leadership change in the state a year ahead of the Assembly elections by replacing Biplab Kumar Deb with Saha as the Chief Minister.

Deb had taken oath as the first Chief Minister of Bharatiya Janata Party in Tripura in 2018 ending the 25-year-rule of the Communist Party of India in Tripura. (ANI)