All the projects under the development of the Central Vista Master Plan were taken up after obtaining necessary clearance, as per extant laws, the Central government informed Lok Sabha on Thursday. 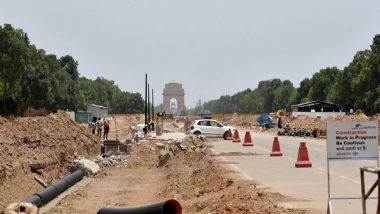 New Delhi [India], July 22 (ANI): All the projects under the development of the Central Vista Master Plan were taken up after obtaining necessary clearance, as per extant laws, the Central government informed Lok Sabha on Thursday.

In a written reply to DMK MP TR Baalu, Union Housing and Urban Affairs Minister Hardeep Singh Puri said, "all the projects under the Development/ Redevelopment of Central Vista Master Plan are taken up after following due processes and obtaining necessary clearances, as per extant laws/ bye-laws, including environment clearance (EC)."

Puri informed that environment clearance for the new Parliament building was granted by the Ministry of Environment, Forests and Climate Change vide their letter dated June 17, 2020.

"EC has been obtained on May 31, for other projects as part of Development/ Redevelopment of Central Vista Master Plan, which includes Common Central Secretariat Buildings and Central Conference Centre, Prime Minister's Residence, Special Protection Group (SPG) Building and Vice President's Enclave through a comprehensive application as per the requirement of laws/ bye-laws," he stated.

As a part of the process of obtaining EC, the minister noted that Environment Impact Assessment (EIA) studies were carried out for all the projects of the Central Vista Master Plan, which are under various stages.

"This study also included the environment impact of the buildings proposed in Executive enclave (comprising Prime Minister's Office, Cabinet Secretariat and National Security Council Secretariats) and ongoing construction of New Parliament Building (for which EC has been already obtained on June 17, 2020) in addition to the projects for which EC was applied for," he said.

Based on this study, the ministry said a comprehensive EIA report was submitted for the consideration of the Expert Appraisal Committee (EAC), which recommended EC after scrutiny of the EIA report.