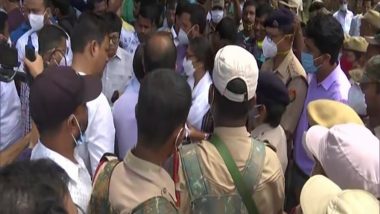 Cachar, July 28: The police stopped a delegation of Congress leaders including Bhupen Bora Debabrata Saikia, Sushmita Dev and others at Dholai in the Cachar district of Assam on Wednesday. Congress leader Sushmita Dev said, "We had said that we will go only till Lailapur market, we will not go to the border. But we were stopped 5 km before."

Speaking on the Assam-Mizoram border situation, the superintendent of police of Cachar Ramandeep Kaur, said that the situation is tense and talks are being held at the senior level.

"The Central Reserve Police Force (CRPF), as a neutral force, is deployed along the border. Assam and Mizoram forces are respectively at their positions. Only the residents of the area are allowed to move," added SP Cachar.

Earlier in the day, Union Home Secretary Ajay Bhalla chaired a meeting with Mizoram chief secretary Lalnunmawia Chuaungo and DGP SBK Singh over the dispute along the Assam-Mizoram border.

The border dispute between Assam and Mizoram had a fierce gun battle between the forces of the two states resulted in the death of five Assam police personnel and one civilian. At least 50 were injured in the incident on Monday. A total of six companies of the Central Reserve Police Force (CRPF) have been deployed at the site where the policemen died, sources said.