What Is Assam-Mizoram Border Dispute? Know All About the Territorial Conflict That Goes Back to British Colonial Era

While Mizoram was carved out of Assam in 1972, the border dispute between the two states goes back to the days of British colonial rule in India. 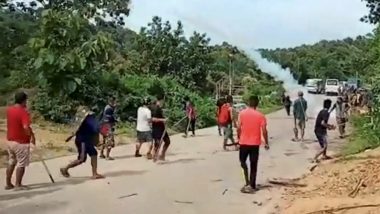 Cachar, July 27: Violent clashes broke out at a disputed border point between Assam and Mizoram on Monday, leading to deaths of six personnel of the Assam police. Amid violent clashes, Assam Chief Minister Himanta Biswa Sarma and his Mizoram counterpart Zoramthanga accused each other of disturbing the status quo in contested border areas. The clashes broke out a few days after Union Home Minister Amit Shah presided a closed-door meeting with chief ministers of the northeast states. What is Assam-Mizoram border dispute? Know more about it below. Assam-Mizoram Border Violence: Amit Shah Has 'Failed' the Country, Says Rahul Gandhi.

What Is Assam-Mizoram Border Dispute?

Three districts of Assam - Cachar, Karimganj and Hailakandi - share a 164.6 km border with Mizoram's Aizawl, Kolasib and Mamit districts. While Mizoram was carved out of Assam in 1972, the border dispute between the two states goes back to the days of British colonial rule in India. 'Such Unremitting Incidents Under BJP's Watch Invited Death of Democracy': TMC on Assam-Mizoram Border Clash.

In August 1875, the British issued a notification and redrew the boundary between the Lushai Hills (the former name of Mizoram before it became a state) and the Cachar plains. It was the first that Mizo chiefs had been consulted for demarcation. The new-drawn boundary had also became the basis for the Inner Line Reserve Forest demarcation two years later.

But in 1933, another notification was issued that demarcated the boundary between Lushai Hills and Manipur. According to this notification, the Manipur boundary begins from the trijunction of Lushai Hills, Cachar district of Assam and Manipur state. While the Mizo community opposes the 1993 demarcation, the Assam government follows it and that is the point of conflict.

It is reported that both Assam and Mizoram had agreed to maintain status quo in the no man’s land in the border area. But tensions persist since 2018 when students’ union MZP (Mizo Zirlai Pawl) built a wooden rest house for farmers on land that was claimed by Assam. The house was later demolished by the Assam police. In October last year, residents of Assam and Mizoram had clashed twice over construction in Lailapu land, which is claimed by Mizoram.

(The above story first appeared on LatestLY on Jul 27, 2021 11:43 AM IST. For more news and updates on politics, world, sports, entertainment and lifestyle, log on to our website latestly.com).