He alleged that nearly 600 farmers have died so far but Prime Minister Narendra Modi did not speak a single word on it even though he speaks on small matters. 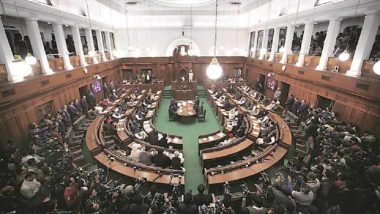 New Delhi, July 30: The Delhi Assembly on its last day of the monsoon session on Friday passed a resolution to repeal the three farm laws and suggested the central government to talk to farmers and resolve their grievances. Delhi Home Minister Satyendar Jain alleged that farm laws are aimed at benefiting big companies not farmers.

“The doubling of farmers' income is a jumla (false promise). These farm laws are passed to benefit some big companies and the farmers will turn from owners to labourers. The Centre should withdraw these farm laws immediately without any condition,” Jain said.

Farmers, mainly from Punjab, Haryana and Uttar Pradesh, are protesting at Delhi's borders since November last year against three agri laws, which were enacted in September that year. Commission for Air Quality Management in NCR and Adjoining Areas Bill Introduced in Lok Sabha.

Aam Aadmi Party (AAP) MLA Jarnail Singh initiated the discussion on the contentious farm laws and said farmers have been sitting on protest at the three border points of Delhi against these laws. He alleged that nearly 600 farmers have died so far but Prime Minister Narendra Modi did not speak a single word on it even though he speaks on small matters.

“Farmers consider land their mother and they can go to any extent to protect it. We want to appeal to Centre through the Assembly that the central government should talk to the farmers and repeal these three farm laws,” Singh said.

Farmer groups have alleged these laws will end the mandi and MSP procurement systems and leave the farmers at the mercy of big corporates, even as the government has rejected these apprehensions as misplaced.

They are protesting against the Farmers (Empowerment and Protection) Agreement of Price Assurance and Farm Services Act, 2020, the Farmers Produce Trade and Commerce (Promotion and Facilitation) Act, 2020, and the Essential Commodities (Amendment) Act, 2020.

Responding to the debate, Leader of Opposition in the Delhi Assembly, Ramvir Singh Bidhuri said the farm laws will increase crop production and double the income of farmers.

“Through these reforms mandis will be expanded. After Narendra Modi became the prime minister, the income of farmers has doubled and production has been increased. I request the CM to give subsidy on purchase of tractors to farmers in Delhi,” Bidhuri said.