It is dedicated to Lord Shiva who, according to Hindu religious beliefs, is the creator, preserver, and destroyer of this universe. 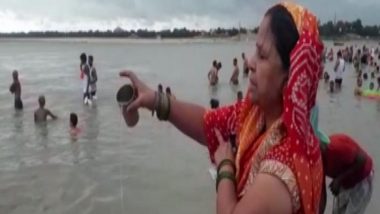 Prayagraj, July 20: Devotees celebrated Somvati Amavasya on the third Monday of the Hindu Sawan month in Prayagraj on the banks of the Ganga river.

Speaking to ANI, Nita Devi at the banks of Ganga river said, "As a part of the ritual, I am fasting and have come here to take a dip in the Ganga. I have offered prayers asking for the long life of my husband as Parvati did for Shiva, according to Hindu beliefs."

"A wife offers prayers for the well being of her husband. It is believed that if a woman follows these rituals, her husband will be immortal," said Sarita Pandey after tying a raw yarn 101 times around a Banyan tree. Pandey said, "Women offer prayers for the well being and long life of their husbands." Sawan 2020 Powerful Shiv Mantras: From 'Mahamrityunjaya Mantra' to 'Om Naham Shivay' Here Are Lucky Mantras You Must Chant During Shravan Month for Sucess, Prosperity and Good Health .

Shravan, the fifth month in the Hindu calendar, is considered to be the most auspicious month of the year. It is dedicated to Lord Shiva who, according to Hindu religious beliefs, is the creator, preserver, and destroyer of this universe.

While Lord Shiva is worshipped on Mondays throughout the year, Mondays during this particular month are considered highly significant and auspicious. The festival is celebrated predominantly in the North Indian states. It is believed that on "sawan ke somwar" (Mondays falling in the month of Shravan), devotees observe a special fast and visit Shiva temples.