Get latest articles and stories on India at LatestLY. Union Minister Jitendra Singh on Friday held a high-level meeting with Jal Shakti Minister Gajendra Singh Shekhawat to review the progress of work at the Ujh multipurpose (National) project in the Kathua region of Jammu and Kashmir. 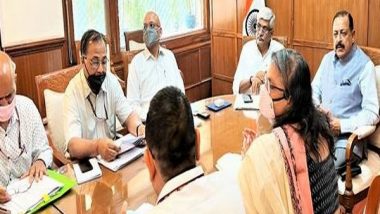 New Delhi [India], May 14 (ANI): Union Minister Jitendra Singh on Friday held a high-level meeting with Jal Shakti Minister Gajendra Singh Shekhawat to review the progress of work at the Ujh multipurpose (National) project in the Kathua region of Jammu and Kashmir.

The meeting was also attended by the Union Secretary of the Jal Shakti Ministry.

After several rounds of meetings in the last few years, Central Water Commission did a detailed techno-economic review of the project and the revised proposal was accepted in the 148th TAC meeting held in January 2022 at an estimated cost of Rs 11,907.77 crore, according to an official statement issued by Ministry of Earth Science.

The expected timeline of completion of the project is about six years and once completed, the project will store around 781 Million Cubic meters of waters of river Ujh (a tributary of river Ravi).

After completion of the project, utilization of waters of eastern rivers allotted to India as per the Indus Water Treaty would be enhanced by utilizing the flow that presently goes across the border to Pakistan, the statement read.

In an earlier meeting chaired by Jitendra Singh in Jammu in 2020, it was decided that an alternate Canal System or Command System will be planned and the DPR accordingly modified so that the surplus water not be utilized by the parts of Kathua district should not inadvertently flow into Pakistan.

He said, with the Shahpur-Kandi project having already taken off, when the Ujh-Multipurpose project also becomes functional, the entire Kandi belt in district Kathua and adjoining parts of district Samba will become fully irrigated and, in fact, irrigation and power surplus.

It is pertinent to mention that the Ujh-Multipurpose project had been held up for several decades and was revived after intervention by Prime Minister Narendra Modi.

Since then, it was being constantly followed up by Jitendra Singh and at his behest, several high-level meetings have been held since 2014 to remove the minor bottlenecks.

The minister also flagged the issue of 'Har Ghar Nal se Jal' in the Udhampur-Kathua-Doda Lok sabha constituency with Shekhawat.

During the meeting, it was desired that Jal Jeevan Mission shall be implemented in Mission Mode for 100 per cent piped water connection to the public by expediting the tendering process. (ANI)