As many as 16 died while 50 to 60 people were rescued after a massive fire broke out in a building near Mundka metro station on Friday evening, the police said. 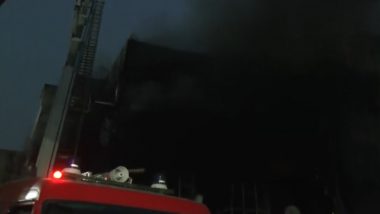 New Delhi [India], May 13 (ANI): As many as 20 died while 50 to 60 people were rescued after a massive fire broke out in a building near Mundka metro station on Friday evening, the police said.

"A total of 20 bodies were recovered from the 3-storey commercial building which had caught fire this evening near Delhi's Mundka metro station. The third floor is yet to be searched," Atul Garg, Delhi Fire Director said.

Speaking to the media, Deputy Commissioner of Police (DCP) Outer district Sameer Sharma said, about 15 fire tenders are at the spot. The rescue operation is continue. Delhi Fire: Massive Fire Breaks Out in a Building Near Mundka Metro Station (Watch Video)

"Rescue operation on. Police force deployed with the area being cordoned off. About 15 fire tenders are at the spot, and more coming in. Fire on two floors. About 50-60 people were rescued," Sharma said.

So far 10 people are injured in the fire, said Delhi Police.

While Sunil Choudhary, Deputy Chief Fire Officer, Delhi Fire Service said that some people jumped off the building, they were shifted to the hospital.

The fire was initiated on the 1st floor of the building which is an office of a CCTV cameras and router manufacturing company. The owner of the company is in police custody.

"One casualty has been reported in the incident and efforts are being made to control the situation," the police said.

Further, there are a total of nine fire brigades present at the spot and an ambulance facility is also available for providing immediate medical assistance to the victim, it added.