Get latest articles and stories on India at LatestLY. Minister for Jal Shakti Gajendra Singh Shekhawat, and Minister for Rural Development and Panchayati Raj Giriraj Singh recognized North Goa and South Goa as 'Har Ghar Jal' certified districts where all households have access to clean water through taps. 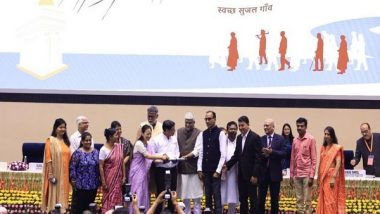 Earlier, in the event, Goa was also felicitated by the President of India Droupadi Murmu for being the first state in the country to achieve 100 percent 'Har Ghar Jal' certification from the Union Jal Shakti Ministry. President Droupadi Murmu also congratulated Goa for being a '1st Har Ghar Jal' certified State, and for securing 2nd position in the Functionality Assessment 2021-22 under more than 60 percent coverage category.