Get latest articles and stories on India at LatestLY. Targetting the CM Ashok Gehlot-led Rajasthan government over the Udaipur incident, Union Minister Gajendra Singh Shekhawat on Thursday said the state has been charred by huge communal riots but the Chief Minister has refused to accept it, adding that the CM is indulging in blaming others for his own failures. 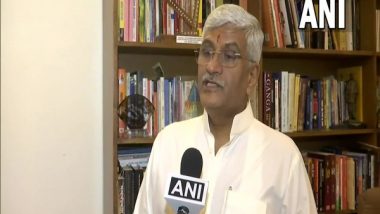 New Delhi [India], June 30 (ANI): Targetting the CM Ashok Gehlot-led Rajasthan government over the Udaipur incident, Union Minister Gajendra Singh Shekhawat on Thursday said the state has been charred by huge communal riots but the Chief Minister has refused to accept it, adding that the CM is indulging in blaming others for his own failures.

Shekhawat's remarks came following the brutal murder of a tailor in Udaipur, who was hacked to death inside his shop by two men on Tuesday.

Also Read | Who is Eknath Shinde? Know Everything About the Former Auto Driver Who Shook Maharashtra Politics to Emerge as CM.

Speaking to ANI, the minister said, "State's been charred with huge communal riots but govt has refused to accept it. Mafias are out of control. State's now rape capital, gang wars happen openly. Criminals' strength has risen... This was bound to happen."

He said that Gehlot has mastered the art of blaming others for his own failures and mistakes. "Ashok Gehlot says that PM Modi and Home Minister Amit Shah should speak on the matter. Why should they speak? You (CM Gehlot) should do your work on your own. He has not said anything in any of such incidents, be it Karauli violence, Bhilwara incident or others," Shekhawat stated.

The minister accused the Rajasthan government of doing transfers and postings for 'political reasons' and blamed it for rising violence cases in the state.

"Rajasthan which was earlier known for peace is today known for attacks and violence," he added.

The incident took place in Udaipur's Maldas area. Soon after committing the crime, the two accused posted a video on social media boasting about the "beheading" and threatened Prime Minister Narendra Modi's life as well, police said. The two accused were arrested within hours of the incident.

The assailants identified themselves in the video as Riyaz Akhtari and Ghouse Mohammad. In the video, Riyaz was seen attacking 47-year-old Kanhaiya Lal with a sharp-edged weapon while the other, Ghouse, recorded the crime on his mobile phone.

The victim reportedly had recently shared a social media post in support of Nupur Sharma-- former BJP leader who had made controversial remarks against Prophet Mohammad. Riyaz and Ghouse were arrested from Bhim in the Rajsamand district. Following the murder, local markets in the area were shut as the traders demanded justice for the victim.

Internet services were suspended in Udaipur and a curfew has been imposed. A statewide alert had also been issued to all SPs and IGs to increase the mobility of forces and to maintain officers on the ground.

NIA on Wednesday took over the investigation of the brutal murder of a tailor Kanhaiya Lal, the tailor, in Rajasthan's Udaipur who was hacked to death inside his shop by two men in broad daylight.

The anti-terror agency has filed a First Information Report (FIR) under the Unlawful Activities (Prevention) Act as well as various sections of the Indian Penal Code.

Earlier today, the NIA said it suspects the role of a "terror gang and not a terror outfit". The anti-terror agency, however, made it clear that there is a role of a bigger gang behind the brutal killing and that it was not just an act done by only two persons, who were arrested by state police after the incident.

"There will be many group members of the accused. It is not just two. There will be a bigger group. The preliminary inquiry suggested that there may not be any terrorist group involved in the murder but a terror gang. Some media reports about the links of the two accused with some terrorist outfit are based on speculation," a senior NIA officer said. (ANI)