Get latest articles and stories on India at LatestLY. The Supreme Court has commuted the death sentence of a man accused of raping and murdering a minor into life imprisonment, observing the possibility and the probability of the reformation and rehabilitation of the man. 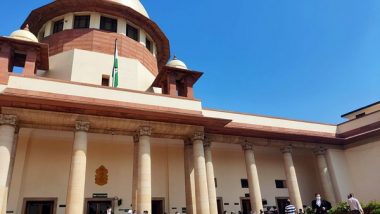 New Delhi [India], May 14 (ANI): The Supreme Court has commuted the death sentence of a man accused of raping and murdering a minor into life imprisonment, observing the possibility and the probability of the reformation and rehabilitation of the man.

"We are of the considered view that the 'crime test' and the 'criminal test' require to be followed before awarding capital sentence, did not gather the required attention of the trial Court as also the High Court," the top court said.

"At the same time, the principles enunciated by this Court in the matter of awarding of death sentence and in such circumstances, the undisputed and indisputable fact that the appellant had no criminal antecedents and he hails from a poor socio-economic background and also his unblemished conduct inside the jail cannot go unnoticed," the top court said.

The court also observed that at the time of the commission of the offence the convict was aged 25 years and said, "Hence, viewing the issue taking into account the aforesaid aspects, we do not find any reason to rule out the possibility and the probability of the reformation and rehabilitation of the appellant."

"The long and short of the discussion is that the present case cannot be considered as one falling in the category of 'rarest of rare cases' in which there is no alternative but to impose the death sentence," the top court said.

The top court awarded life imprisonment to the convict, by providing for actual imprisonment for a period of 30 (thirty) years without application of the provisions of premature release/remission.

However, the court noted that all murders are inhuman but for imposing a capital sentence, the crime must be uncommon in nature where even after taking into account the mitigating circumstances the Court must be of the opinion that the sentence of imprisonment for life is inadequate and there is no alternative but to impose the death sentence.

"The heinous and brutal nature of the commission of the crime, viz., brutal rape and murder of an eight-year-old girl child who is none other than the daughter of his own cousin, that too in a hapless situation, is definitely an aggravating circumstance, " the top court observed.

The top court was hearing a man's plea challenging the High Court of Madhya Pradesh at Gwalior order dated July 14 2016, which confirmed capital punishment awarded to the man by the trial court.

The man was convicted of killing and raping an 8-year-old girl in 2014 in Dabra in the district of Gwalior in Madhya Pradesh. The man was the uncle of the deceased victim. (ANI)