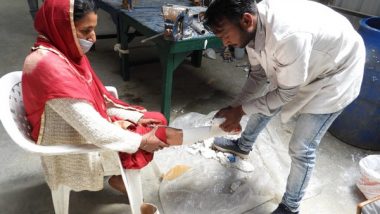 The camp was conducted from May 8 to 13 with the aim to help those needy locals for whom getting an artificial limb, wheelchair and hearing aid is beyond their financial means.

A total of six artificial limbs, 33 wheelchairs, 35 hearing aids, five tri-cycles, five auxiliary crutches and two hand sticks were given to the locals throughout the camp.

Specially-abled persons were provided with suitable rehabilitation aids as per the requirement of each person free of cost. More than a hundred patients benefitted from this drive in a span of six days with the team working day and night, Army said in a press statement.

The camp has been appreciated by the locals who expressed their gratitude towards the Indian Army and the NGO for organising the camp for the underprivileged on such a large scale.

Zamindar Gali Brigade Commander interacted with the beneficiaries of the camp and praised the efforts of the Jaipur-based NGO for reaching out to the people of North Kashmir.

He assured of continued assistance by the Indian Army towards such benevolent and humane initiatives that are helping in the betterment of lives of specially-abled persons, the release added. (ANI)