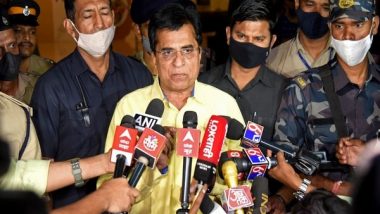 Somaiya today visited Gol Deval Temple in Mumbai to offer prayers at the temple. After visiting the temple, the BJP leader spoke to reporters and said, "For the first time in history, a Shiv Aarti has not been played in this temple. Thackeray is impressing Muslims, selling religion for safeguarding Chief Minister's post. Instead of opting for such moves, Thackeray should say sorry to Hindus living here."

"I often visit this temple. Shiv Sena is trying to impress Congress President Sonia Gandhi by opting for such moves," he added.

Somaiya further added that loudspeaker-row is bringing black days for Hindus living in the state. "Several loudspeakers are still being played at mosques in Maharashtra to disturb the peace and sleep of Hindus," he said.

In April 2022, the Maharashtra home department decided to implement to make it mandatory for religious sites to seek permission for using loudspeakers.

Issuing a statement about the loudspeaker row in Maharashtra, Maharashtra Navnirman Sena chief Raj Thackeray in April issued an ultimatum to the mosques in the state to restrict the usage of loudspeakers.

In a warning during a public rally, the MNS leader earlier said, "Loudspeakers in mosques should be shut till May 3rd otherwise, we will play Hanuman Chalisa in speakers. This is a social issue, not a religious one. I want to tell the state government, we will not go back on this subject, do whatever you want to do." (ANI)