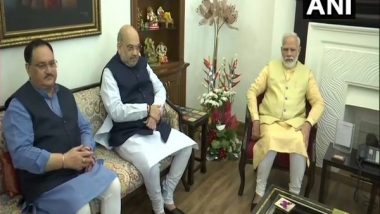 The Chief Minister had also met the Prime Minister earlier in the day.

The Chief Minister's visit to Delhi came amid speculation of expansion of his cabinet.

Sources said that Yogi Adityanath's discussions with party leaders pertained to the management of the COVID-19 in Uttar Pradesh and preparations for next year's assembly polls.

They said there is also a possibility of the state getting more representation in any expansion of the union cabinet.

While the Chief Minister met PM Modi and BJP chief on Friday, he had met Home Minister on Thursday.

With elections due in Uttar Pradesh next year, the BJP is making efforts to strengthen the organisation based on feedback from its state leaders in the wake of the outcome of panchayat polls and the murmurs from some sections over handling of the COVID-19 situation. (ANI)