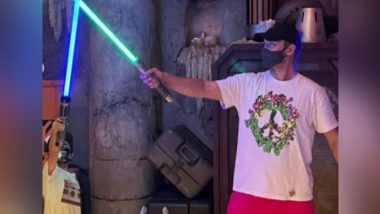 American singer-songwriter Justin Timberlake enjoyed the 'coolest' visit to Star Wars: Galaxy's Edge at Walt Disney World with his eldest child Silas on Saturday (local time). Sharing a sneak peek into his fun day at Disney, the 10-time Grammy Award winner took to his Instagram handle and posted a series of pictures and videos where he is seen building his own lightsabers with his 6-year-old son. Jessica Biel Opens Up About Her Family Life With Justin Timberlake.

"I don't know who was freaking out more... me or my six year old. This was the coolest. Big thank you to @waltdisneyworld for an amazing trip," Timberlake wrote in the caption. In a video shared by Timberlake, the father-son duo is seen putting together their lightsabers, which appeared to be a breeze for Silas, but not so much for the singer. "When your six year old assembles his lightsaber twice as fast as you," the father of two wrote. Justin Timberlake Apologises For Ill-Treating Britney Spears And Janet Jackson, Issues A Statement After Receiving Backlash For His Behaviour.

Timberlake shares son Silas with wife Jessica Biel, whom he married in Italy in October 2012. The couple welcomed their second son, Phineas, in July 2020.

According to People Magazine, Timberlake in a January interview on the podcast Armchair Expert with Dax Shepard where he opened up about trying to raise his kids out of the spotlight.