Sex And The City Stars to Get Over USD 1 Million Per Episode for HBO Max’s Revival Series: Reports 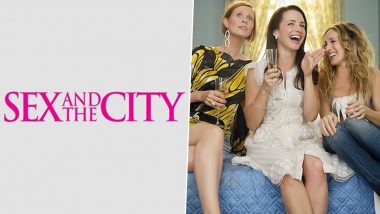 The stars of the Sex and the City revival will be paid more than USD 1 million per episode for the HBO Max series. A source told Variety, returning actors Sarah Jessica Parker, Cynthia Nixon, and Kristin Davis will also serve as executive producers on the 10-episode project titled "And Just Like That..."

Representatives for the trio and the WarnerMedia-owned streamer did not immediately respond to request for comment. "Sex and the City", the original series, ran on HBO from 1998 through 2004 and featured Parker as Carrie Bradshaw, Nixon as Miranda Hobbes and Davis as Charlotte York. Sex And The City: Kim Cattrall Who Played Samantha Jones in the Original Series Is Not Returning

The revival will follow Carrie, Miranda and Charlotte as they navigate the journey "from the complicated reality of life and friendship in their 30s to the even more complicated reality of life and friendship in their 50s." The production on the series will start in New York sometime in April or May. Kim Cattrall, who played Samantha Jones in the original series, is not returning. The new Max Original series is based on Candice Bushnell's book "Sex and the City" and the original TV series created by Darren Star. Sex And The City Revival To Feature Sarah Jessica Parker, Kristin Davis And Cynthia Nixon, Confirms HBO Max (Watch Video)

Michael Patrick King, the producer of the original series and the "Sex and the City" films, is also on board as executive producer. A prequel series to the show, "The Carrie Diaries", was launched on The CW in 2013, with AnnaSophia Robb playing a young Carrie and ran for two seasons.