Pakistan Pacer Wahab Riaz Says ‘No Other League Can Compete With IPL, It’s at Different Level’

He also said that all the best international players make their presence felt in the IPL and as a result, it cannot be compared to Pakistan Super League (PSL). 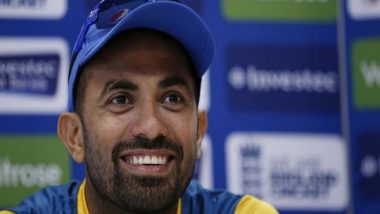 Lahore, May 15: Pakistan pacer Wahab Riaz has said that the Indian Premier League (IPL) is at a different level and no other league in the world can compete with it. He also said that all the best international players make their presence felt in the IPL and as a result, it cannot be compared to Pakistan Super League (PSL).

"IPL is a league where all the top international players come and play. You can't compare IPL with PSL, I believe IPL is at a different level. Their commitments, the way they run things, communicate things, the way they draft the players, that is totally different," Riaz told Cricket Pakistan's official YouTube channel. Wasim Akram Rates Bowling Quality in PSL Better Than in Indian Premier League, Says ‘In All IPL Teams There Is at Least One Bowler to Attack’.

"I don't think any league can compete with the IPL, but if there is any league that stands behind it, it has to be the PSL. The League in Pakistan has proved it," he added. However, the pacer went on to praise the bowling standards in the PSL and he complimented the entire bowling attack in the competition.

"The standards of bowling are quite high in the PSL. The kind of bowlers you get in the PSL is not found in other leagues, not even in the IPL. This is why PSL doesn't have many high-scoring games. The bowling attacks in PSL are the best in the world," said Riaz.

On May 4, the IPL governing council (GC) and Board of Control for Cricket in India (BCCI) in an emergency meeting unanimously decided to postpone IPL 2021 season. The BCCI is now keen to tap the September window before the T20 World Cup to finish the league.

On the other hand, the PCB and the six franchise owners narrowed down on UAE as a preferred venue for the remaining 20 matches of the PSL. PSL six was postponed after a string of COVID-19 cases were reported in March this year. The tournament will now resume in June with the final scheduled for June 20.