Sarah Glenn and Freya Davies were on Friday released from England women's Test squad ahead of the one-off game against India. 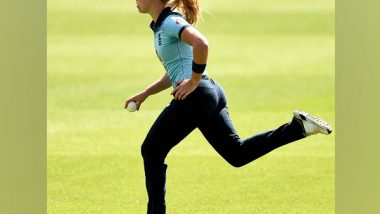 London [UK], June 11 (ANI): Sarah Glenn and Freya Davies were on Friday released from England women's Test squad ahead of the one-off game against India.

The two teams will first square off in a four-day Test match, beginning June 16. Then both teams will lock horns in three ODIs beginning June 27 with the matches slated to be played at Bristol, Taunton, and Worcester.

Both Glenn and Davies will now play for regional teams in this weekend's Rachael Heyhoe Flint Trophy matches to prepare for the ODI series.

"Sarah Glenn and Freya Davies have been released from the England Women's Test squad and both will play for their regional teams in this weekend's Rachael Heyhoe Flint Trophy matches - in preparation for the ODI series that follows," England Cricket tweeted.

India and England will then square off in three T20Is, beginning July 9 and the three matches will be played at Northampton, Hove, and Chelmsford.

The England and Wales Cricket Board (ECB) on Wednesday confirmed that there is a first international call-up for Central Sparks seamer Emily Arlott for the upcoming one-off Test against India women, beginning June 16.

Arlott is fresh from a hat-trick in the Rachael Heyhoe Flint Trophy at the weekend, while South East Stars captain Tash Farrant has also been included in the 17-member squad.