As the Indian women's hockey team reached the semi-finals of the ongoing Tokyo Olympics, the entire country is celebrating the achievement of Rani Rampal's side. 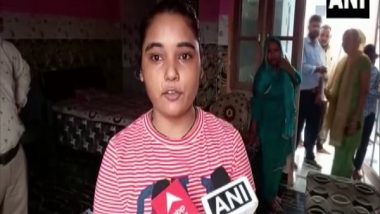 Haridwar (Uttarakhand) [India], August 2 (ANI): As the Indian women's hockey team reached the semi-finals of the ongoing Tokyo Olympics, the entire country is celebrating the achievement of Rani Rampal's side.

Vandana Katariya, who scored three of India's four goals against South Africa, in the group stage, also had a big role to play in the quarter-final clash against Australia.

Vandana's sister Anjali on Monday said she is on her way to fufill the dream of their late father.

"Family is very happy that Indian women's team has reached the semi-finals. Vandana is fulfilling the dream of our late father. I want to congratulate the team and Vandana for this achievement," Anjali told reporters.

India beat Australia 1-0 as they moved into the semis at the Tokyo Olympics. This is the first time that the Indian women's hockey side has made it to the semi-finals of the Olympics.

In what comes as a historic day and possibly the greatest moment for women's hockey in India, Gurjit Kaur scored the lone goal in the match during the first half through a penalty corner in a very tightly contested match.