Get latest articles and stories on Sports at LatestLY. The duo of Mirza and Pavic made it to the next round with 6-4, 3-6, 7-5 win over Dabrowski and Peers. 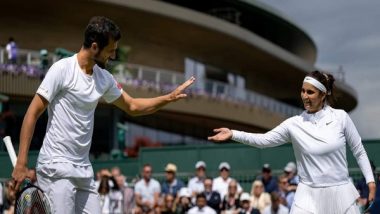 The Indo-Croat pair will take on Robert Farah and Jelena Ostapenko in the semifinal clash.

Meanwhile, Ajla Tomljanovic after two hours and 34 minutes of dizzying all-court rallies, overcame French No.1 Alize Cornet 4-6, 6-4, 6-3 to book a spot in the quarterfinals at All England Club once again.

Tomljanovic is the first Australian woman to reach back-to-back Wimbledon quarterfinals since Jelena Dokic reached the quarterfinals in 1999 and the semifinals in 2000.

The Australian had a topsy-turvy victory over Cornet during her Wimbledon campaign last year as well, defeating the Frenchwoman in three sets in the second round. History repeated on No.2 Court on Monday, and Tomljanovic now has a 3-2 lead in their head-to-head clashes.

"Today was crazy. [Cornet's] level was really high from the get-go. I think the second point of the first game was so long that I kind of thought to myself, 'Oh, my God, I don't know if I'm going to physically be able to keep up with her.' But I found a way," Tomljanovic said afterwards.

"It felt like a coin toss a little bit. I mean, she fights till the end. She wasn't giving me much. That's why in the end I was a little bit in disbelief that I actually came through," she added. (ANI)