Tech News | Microsoft Will End Support for Windows 10 in 2025

Get latest articles and stories on Tech at LatestLY. With a new version of Windows, potentially called Windows 11, scheduled to launch by the end of this month, Microsoft has announced that support for Windows 10 will end on 14 October 2025. 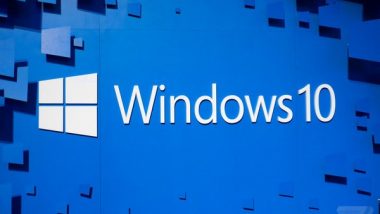 Washington [US], June 12 (ANI): With a new version of Windows, potentially called Windows 11, scheduled to launch by the end of this month, Microsoft has announced that support for Windows 10 will end on 14 October 2025.

This includes the Windows 10 Home Pro and the Pro versions for Education and Workstations. The tech giant recently updated its official Windows 10 documentation to include this information.

On Microsoft's Windows 10 Home and Pro Lifecycle Policy page, the company stated that it will "continue to support at least one Windows 10 Semi-Annual Channel until October 14, 2025."

Underneath, it then lists the retirement date of 'Windows 10 Home and Pro' as 14 October 2025. This means that the tech giant will not release any more updates and security fixes after that date.

However, the company's recent teaser confirmed that it will launch Windows 11 by the end of this month. It has listed a new event on its website, which will take place on June 24.

As per The Verge, at the event, the company will highlight everything that is coming 'next for Windows.'

The event will kick off at 8:30 pm IST. Microsoft confirmed this news via its official Twitter handle. Windows 11 is expected to get a major UI overhaul.

As per The Verge, Microsoft has been working on something codenamed 'Sun Valley', which the company has referred to as a "sweeping visual rejuvenation of Windows." There will be many other changes, including some significant Windows Store ones.

Microsoft has also been working on a new app store for Windows in recent months, and rumours have suggested Microsoft will open its store up to all apps and rival payment platforms. (ANI)