Get latest articles and stories on World at LatestLY. China's infamous Zero-COVID policy has gained eyeballs for all the wrong reasons and amid this European and US companies in China have expressed concern about an increasingly unstable investment climate due to seemingly unending lockdowns and severe disease control measures. 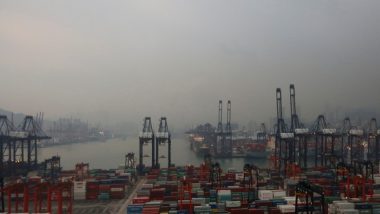 Beijing [China], May 17 (ANI): China's infamous Zero-COVID policy has gained eyeballs for all the wrong reasons and amid this European and US companies in China have expressed concern about an increasingly unstable investment climate due to seemingly unending lockdowns and severe disease control measures.

Many foreign companies are looking to shut down their businesses and relocate as China continues to remain marred with unending restrictions. Even though Xinhua, the Chinese state-controlled media while issuing an article on May 12 called on foreign businessmen not to leave but it seems like companies already had a reality check, reported The Hong Kong Post.

These foreign companies are reluctant to continue their businesses in China as the country's policies framed to contain COVID are taking a toll on their businesses. Companies wish to think for the future and with China's high handedness in combatting COVID, the future to these companies seems bleak.

According to a report on May 5, the European Union Chamber of Commerce in China said that in a recent survey, European companies said that China's zero policy on the epidemic had severely hit their supply chains, and they were forced to cut staff, lower revenue forecasts. Nearly a third of those companies said they had made layoffs.

Foreign companies in China are left with no choice but to divert their investments to other markets. The data collected in numerous surveys also suggested the same will of these companies. According to the internal survey, 23 per cent of the 372 companies that responded were considering moving current or planned investments out of mainland China, more than double the January survey and the highest percentage in a decade.

Moreover, about 78 per cent of respondents said mainland China is now less attractive to investors due to the so-called zero-clearing policy, as per the media portal.

Jorg Wuttke, President of the European Union Chamber of Commerce in China said, "We've seen the damage to our business," and added that companies are putting investment on hold because of what's happening in China.

Companies are not worried for no reason. Tedros Adhanom Ghebreyesus, Director-General of the World Health Organization, made the WHO's views on China's COVID policies clear on 10 May. He said Beijing's zero policy was unsustainable given what is currently known about COVID-19. This only adds up to the already prevailing concern within Beijing about the outlook for its economic growth amid these stern COVID rules. (ANI)