After a pause of three days, the COVID-19 vaccination drive resumed in Nepal's capital Kathmandu on Monday. 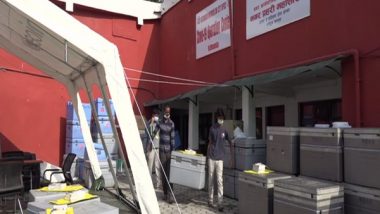 Visual from a COVID-19 vaccination centre in Kathmandu. (Photo/ANI)

Kathmandu, June 15: After a pause of three days, the COVID-19 vaccination drive resumed in Nepal's capital Kathmandu on Monday.

"Officials at the vaccination centre - vaccinators, volunteers, and management staff will take forward the inoculation drive for people aged between 60 to 64 years. Along with those who received the first dose of Vero Cell, workers of the health sector and other front-liners also are being administered with the jab," Hari Bahadur Kunwar, Division Chief at Department of Urban Health, Kathmandu told ANI.

Doses of Vero Cell, which is being administered to people around Kathmandu as well as Bhaktapur, are being ferried from a temporary cold store set in the premises of Kathmandu Metropolitan City Office. A total of 24 staffers stationed in COVID-19 Operation Centre for continued supply and storage of vaccines.

As per the official, 150 and 170 litre capacity Ice lined Refrigerator (ILR) are being used in the cold store to stock the vaccines.

"Vaccines, which we receive and store, come from the Provincial Health Office, Kathmandu. We keep a record of those along with the number of dosages used for inoculation on a daily basis in our database," Division Chief Kunwar informed.

Due to shortage of vaccine doses, the Kathmandu Metropolis on June 11 had announced a halt in the inoculation drive which had started from June 8. Issuing a notice on June 11, the metropolis said that the whole stock of Vero Cell vaccines that was provided to the district by the Department of Health Services had been used.

Three days after halting the vaccination drive, KMC on Sunday issued another notice stating that all persons aged 60 and 61 scheduled to receive their first dose on June 11 and 12 but missed due to the campaign suspension, will now be able to get the first jab.

"At the time when the vaccination drive was halted, I felt bad about it. I was in a sort of confusion thinking when would it come but it came early and before time I had expected it to resume," Kumar Shrestha, a 61-year-old, told ANI at a local vaccination centre on Monday.

Stalled for several months due to shortage of COVID-19 vaccine, the inoculation drive in Nepal resumed from last Tuesday after it received one million shots of Vero Cell in the early week of June.

With the resumption of the inoculation, senior citizens between 60 to 64 years queued up in vaccination centres around Kathmandu Valley and all seven provinces of the Himalayan nation to receive the shot.

Nepal started the inoculation drive in January with Covishield vaccines after it received one million doses on a grant basis from India.

Later in the month, Nepal ordered additional two million doses of vaccines on a commercial basis but got delivery of half of it. With the onset of a second wave of infection in India and difficulty in procuring vaccines, Nepal halted the inoculation drive.