China will host the BRICS Foreign Ministers meeting on Thursday via video link in which External Affairs Minister S Jaishankar will take part along with his counterparts from the five-member bloc, a top Chinese official said on Wednesday. 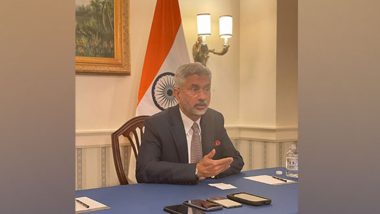 During the meeting, the BRICS Foreign Ministers will have a "BRICS+" dialogue with their counterparts from emerging markets and developing countries, he told a media briefing here. He, however, did not disclose the names of the countries taking part in the BRICS Plus dialogue. Bangladesh, the United Arab Emirates (UAE), Uruguay and Egypt have been previously admitted as members of the BRICS New Development Bank (NDB), further expanding the bank's global outreach. EAM S Jaishankar Hands Over PM Narendra Modi's Invitation to Bangladesh PM Sheikh Hasina to Visit India.

China holds the chair of the BRICS (Brazil, Russia, India, China, South Africa) this year. About China's expectations of the BRICS Foreign Ministers meeting, Wang Wenbin said that the meeting will send a "clear message" of unity and make preparations for the annual summit of the five-member bloc. "We will send a clear message of BRICS countries working together in solidarity, upholding true multilateralism, staying united in fighting COVID-19 and promoting peace and development," Wang said.

"More importantly, we will make good preparations for the BRICS Summit," he said. This year's summit is being held in the shadows of Russia's military offensive against Ukraine. "BRICS is a cooperation mechanism of emerging markets and developing countries with global influence," Wang said. "In the face of the once-in-a-century pandemic and changes, the BRICS mechanism is of special and importance significance for deepening cooperation among emerging markets and developing countries and promoting post-COVID world economic recovery," he said. BRICS Countries Mull Pandemic Early Warning System.

The Foreign Ministers meeting was proposed by Chinese President Xi Jinping during China's chairmanship of the five-member bloc in 2017, he said. Under the strategic leadership of BRICS leaders, the foreign ministers' meetings have played an important role in strengthening political mutual trust and deepening political security cooperation among the five BRICS countries, Wang Wenbin said. "As the BRICS chair for 2022, China looks forward to enhancing communication and coordination with fellow BRICS partners on the new features and challenges of the current international situation and major international and regional issues," he said.