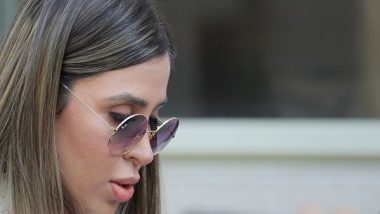 Aispuro entered her plea in federal court in Washington nearly two years after Guzman was sentenced to life in prison plus 30 years for engaging in a continuing criminal enterprise, drug trafficking and firearms charges as leader of the Sinaloa Cartel, reported CNN

The New York Times had earlier reported that Aispuro would plead guilty to being a "minimal participant" in helping her husband run his drug empire.

She was earlier arrested in February on international drug trafficking charges at Dulles International Airport and remained detained pending trial.

She was a regular fixture at Guzman's 2019 Brooklyn federal trial, appearing nearly every day for the two-month-long trial.

Guzman, who formerly ran the Sinaloa drug cartel, was convicted on 10 counts including engaging in a continuing criminal enterprise, conspiracy to launder narcotics proceeds, international distribution of cocaine, heroin, marijuana and other drugs, and use of firearms.

In Guzman's trial, a cooperating witness testified that Coronel and others worked together to coordinate details of Guzman's last escape from prison in Mexico and that Coronel would often relay messages from Guzman in prison to others, CNN reported. (ANI)