World News | One Policeman Killed, 4 Others Injured in Explosion at Police Check Post in Pakistan

Get latest articles and stories on World at LatestLY. One policeman was killed and four others including two other policemen were injured in a blast that occurred inside a police check post in the Mardan district of Pakistan's Khyber Pakhtunkhwa province, local media reported citing police officials. 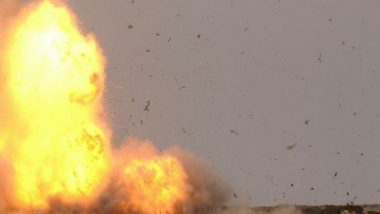 Khyber Pakhtunkhwa [Pakistan], July 7 (ANI): One policeman was killed and four others including two other policemen were injured in a blast that occurred inside a police check post in the Mardan district of Pakistan's Khyber Pakhtunkhwa province, local media reported citing police officials.

The Mardan District Police officer said that the explosion occurred at the Chamtar police check post in the Mardan district which killed station in-charge Maqsood Chawoki.

Also Read | Unprecedented: Docuseries on Donald Trump and His Family To Release on July 10 on Discovery+ (Watch Video).

He confirmed that among the injured, two were policemen and the other two were passers-by who received serious injuries, News International reported.

Following the explosion, the rescue officials and a team of police officials reached the incident spot, he added.

The injured policemen and the other two were shifted to a hospital nearby for further treatment, Mardan DPO said. He added that the body of the deceased policeman was also sent to the hospital for legal formalities, News International reported.

As per the initial information, no groups have claimed the responsibility for the explosion so far.

The district police have launched an investigation into the matter and are probing the intensity and the nature of the blast.

In recent months, several such cases of bomb attacks have been reported in Pakistan. Earlier, on June 25, one policeman and ten others including three policemen were injured after a bomb planted in a motorcycle exploded in the Maula Dad Road area of Jacobabad district in Pakistan's southern Sindh province.

Since the Taliban took control of Afghanistan, Pakistan has increasingly complained of attacks across the border from Afghanistan, an issue that has become a source of diplomatic tension.

Regional experts say the rise of the Tehrik-e-Taliban Pakistan enabled by the Afghan Taliban's steadfast support will expand the threat of terrorist attacks in Pakistan, including against civilian targets.

Since its founding in 2007, the TTP has emerged as the most influential and violent anti-Pakistan terrorist outfit in South Asia. Unlike its Afghan namesake, the TTP does not enjoy favourable relations with Islamabad.