Get latest articles and stories on World at LatestLY. Pakistan Muslim League-N leader and Interior Minister Rana Sanaullah on Sunday warned the participants of the Pakistan Tehreek-e-Insaf's (PTI) Islamabad long march and said that he will restrict them to their homes. 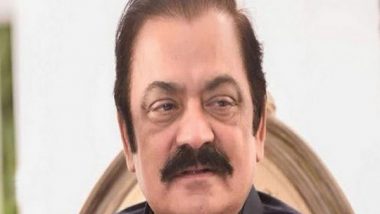 Islamabad [Pakistan], May 23 (ANI): Pakistan Muslim League-N leader and Interior Minister Rana Sanaullah on Sunday warned the participants of the Pakistan Tehreek-e-Insaf's (PTI) Islamabad long march and said that he will restrict them to their homes.

Addressing the PML-N workers' convention in Bahawalpur, the Interior Minister said, "We will not let them come outside their houses and we will arrest them if they try to create chaos."

Sanaullah further said that his party will not let the Islamabad long march participants come out of their homes if a decision is taken by the coalition government to stop them from entering the federal capital, ARY News reported.

The PML-N leader announced that his political party will create a history by organising a mammoth public gathering in Bahawalpur on May 28 on the occasion of Youm-e-Takbeer. He further said that this rally can be addressed by Maryam Nawaz and Hamza Shahbaz will represent Shehbaz Sharif in his absence.

He asked the PML-N workers to attend the upcoming rally in large numbers, according to ARY News.

The Interior Minister slammed Awami Muslim League (AML) chief Sheikh Rasheed over his statement about a 'bloody' long march in Islamabad. He warned him of strict action if anyone tries to create chaos in the federal capital.

Earlier in the day, Pakistan Tehreek-e-Insaf (PTI) Chairman and former prime minister Imran Khan announced that the Islamabad long march will take place on May 25, as reported by ARY News.

Tabling his demands, the PTI chairman said, "We are demanding the date of fresh elections and dissolution of the assembly. We want fair and free elections in the country. Our style of politics is peace and our public gatherings are attended by people from all walks of life and women."

"In our politics, this is the jihad for our real independence. We will take legal action if hurdles are created for the peaceful long march. I will wait for you at Srinagar Highway on May 25," he added. (ANI)