Get latest articles and stories on World at LatestLY. Pakistan's oil and eatable import bill surged by 58.98 per cent to USD 24.77 billion in the months of July and April even the country battles a fast declining economy, owing to an increase in international prices and a massive depreciation of the rupee. 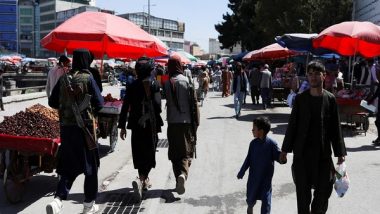 Islamabad [Pakistan], May 15 (ANI): Pakistan's oil and eatable import bill surged by 58.98 per cent to USD 24.77 billion in the months of July and April even the country battles a fast declining economy, owing to an increase in international prices and a massive depreciation of the rupee.

When compared to last year's import bill of USD 44.73 billion, the country's overall import bill spiked by 46.51 per cent to USD 65.53 in ten months ending October 2022, reported the Dawn newspaper. The share of these products also faced an increase of 37.79 per cent. The sharp ascent in these two sectors has resulted in trade deficits in Pakistan, adding pressure on the government's external side.

Reportedly, in order to close the gap in food production, the food import bill had a surge of over 12.30 per cent to USD 7.74 billion in 10MFY22, reported the Dawn newspaper. The import bill in Pakistan is likely to spike further in the following months as the Pakistan government has decided to import about 4 million tonnes of wheat and 0.6 million tonnes of sugar to build strategic reserves, reported the Dawn newspaper.

Meanwhile, there was also a steady increase in edible oil imports in terms of both value and quantity. The value of the palm oil import bill was also hiked by 44.64 per cent to USD 3.09 billion in ten months ending October 2022, up from USD 2.14 billion in 10MFY21. This in turn resulted in a domestic price surge in vegetable ghee and cooking oil.

Notably, the import of soybean oil ascended by 101.96 per cent in value and 9.30 per cent in quantity this year while wheat imports had a decline of 19.12 per cent to 2.206 million tonnes from 3.61 million tonnes in the previous year, reported the Dawn newspaper. Pakistan witnessed a zero wheat import in the month of April.

Meanwhile, according to a report released by the Global Report on Food Crises, Pakistan's Balochistan, Khyber Pakhtunkhwa and Sindh provinces are suffering from acute food shortages. A hike in food and fuel prices, drought conditions, livestock diseases, and unemployment issues have contributed to the rise in national food rates.

Further, ahead of the delay in the revival of the International Monetary Fund (IMF) programme and falling foreign currency reserves, the Pakistani rupee hit an all-time low against the US Dollar, crippling the country's economy further. (ANI)