Get latest articles and stories on World at LatestLY. Prime Minister Ranil Wickremesinghe has said that USD 600 million would be required to ensure an adequate supply of fertilizers in Sri Lanka. 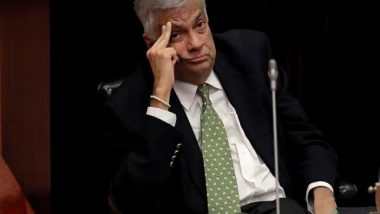 Colombo [Sri Lanka], May 28 (ANI): Prime Minister Ranil Wickremesinghe has said that USD 600 million would be required to ensure an adequate supply of fertilizers in Sri Lanka.

He was speaking during a discussion with representatives from the agriculture sector.

The officials present in the meeting informed the PM that the fertilizer companies would be able to supply the required fertilizer quantities if the banks released the dollars.

PM instructed the representatives to boost agriculture productions to cope with the food shortage.

The Prime Minister also explained that he would be presenting a new bill in Parliament, the Essential Agriculture Supplies Act, which would ensure uninterrupted supply and distribution of agricultural materials.

Wickremesinghe during his discussions with the representatives said that urgent actions need to be ensured else Sri Lanka's food supplies would worsen, reported Colombo Page.

Instructing the officials to identify underutilized land in the urban areas which could be cultivated, the PM said that the situation in the country was dire and required a combined effort.

During the meeting, the Prime Minister was joined by Minister of Agriculture, Mahinda Amaraweera, Minister of Ports and Aviation, Nimal Siripala de Silva, and Minister of Youth & Sports, Roshan Ranasinghe, along with relevant officials.

Wickremesinghe on Friday praised India for extending support amid the continuing economic crisis and expressed a desire to further strengthen ties between the two nations.

"I expressed our country's appreciation for the support India has extended during this difficult period. I look forward to further strengthening ties between our nations," the Sri Lankan PM tweeted.

Wickremesinghe also said he is grateful for the response from India and Japan on the proposal made for the Quad to take the lead in setting up a foreign aid consortium to assist the crisis-hit country.

Wickremesinghe's appreciation of India came on the same day when its neighbour donated 25 tons of drugs and other medical supplies valued at close to SLR 260 million.

Sri Lanka is now facing its worst economic crisis since gaining independence in 1948. The recession is attributed to foreign exchange shortages which left the country unable to buy enough fuel, with people facing an acute scarcity of food and basic necessities, fuel, and gas. (ANI)