Donald Trump Says He 'Learned a Lot' About COVID-19 by Going to 'Real School' And Not the 'Read the Book School'; US President Shares Video

In the video, Trump said that he had "a very interesting journey" where he learned a lot about COVID-19 by going to the "real school" and not the "read the book school". 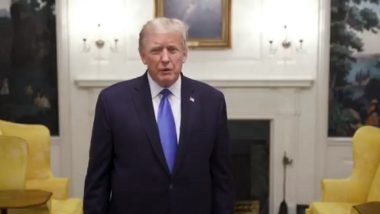 Maryland, October 5: US President Donald Trump on Sunday made a brief drive outside the Walter Reed National Military Medical Center, where he is being treated for COVID-19. Trump's motorcade drove past his supporters who were seen waving at him. Shortly before he left the hospital, Trump posted a video on Twitter, saying "I also think we will pay a little surprise to the patriots that are waiting outside in the streets."

In the video, Trump said that he had "a very interesting journey" where he learned a lot about COVID-19 by going to the "real school" and not the "read the book school". "It has been a very interesting journey. I learned a lot about COVID-19. I learned by really going to the school and this is the real school and this isn't the read the book school. And I get it and I understand it," he said. Donald Trump Health Update: 'Can be Discharged by Monday', Says Medical Team After White House Admits Initial Cover-Up.

The US President further said that he is getting great reports from the doctors at Walter Reed. "The work they do is absolutely amazing," he added.

Earlier today, Trump had appreciated his supporters who are outside the Walter Reed hospital as he is being treated for novel coronavirus. "I really appreciate all of the fans and supporters outside of the hospital. The fact is, they really love our country and are seeing how we are making it greater than ever before," Trump tweeted.

His medical team had said that Trump experienced two episodes of blood-oxygen drops during his illness but he is likely to be discharged on October 5 (Monday). On Thursday, President Donald Trump and First Lady Melania Trump were tested positive for coronavirus.