Get latest articles and stories on World at LatestLY. Chinese President Xi Jinping reached Hong Kong on Thursday to mark the 25th anniversary of the city's handover from Britain to China, Xinhua reported. 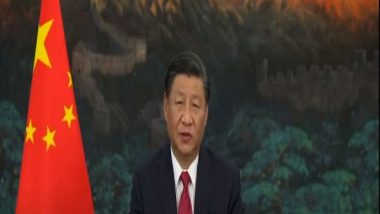 While attending the event, he said that the future of Hong Kong will surely be brighter if "one country, two systems" is firmly upheld and implemented.

According to Xinhua, it is Xi Jinping's first visit outside mainland China since the onset of the Pandemic as Xi came to Hong Kong to mark the 25th anniversary of its return to Chinese rule -- a highly symbolic event at a pivotal time for both the city and Xi himself.

The former British colony is midway through the 50-year promise of "a high degree of autonomy," given by Beijing under a framework known as "one country, two systems." It is also swearing in its newly appointed leader, hardline former police officer John Lee.

Meanwhile, China has thrown a media shield around Xi's visit to Hong Kong and barred journalists from leading international media organizations, including Reuters and CNN from covering official ceremonies.

Xi is only months away from finishing his first decade in power -- and is widely expected to seek an unprecedented third term at a key meeting of the ruling Communist Party this fall. His two-day trip is a timely declaration of political victory for Xi, who has brought Hong Kong to heel with a sweeping national security law following the 2019 anti-government protests.

In just two years, critics say, the law has been used to crush the city's opposition movement, overhaul its electoral system, silence its outspoken media and cripple its once-vibrant civil society.Reuters, Agence France-Press (AFP), and the Hong Kong-based South China Morning Post were among the outlets whose reporters were blocked from covering the ceremonies.

The government's Information Services Department issued invitations to news organizations on June 16, allowing only one journalist per outlet to cover each event whereas journalists who had their applications denied would not be able to cover the national flag-raising ceremony and the swearing-in of Lee.

Each media representative was required to conduct daily PCR tests starting June 26 -- before official approval or rejections were issued on June 28 -- and to go into hotel quarantine on June 29 as part of coronavirus-related prevention measures.

Hong Kong was once home to one of Asia's most vibrant media scenes, and a place that professed freedom of speech and freedom of the press. But over the last few years, it has lost almost all its home-grown independent news outlets.

Beijing imposed a national security law on the city in the wake of anti-government protests in 2019. Since then, critics allege some of the freedoms China promised to protect at the handover 25 years ago have been curtailed.

The Hong Kong government dismisses suggestions that press freedom has been undermined, but the future of local independent reporting looks bleak as some of the city's major pro-democracy media outlets have been toppled after enormous government pressure and police raids on their newsrooms. (ANI)