More than 40 million Americans run on a regular basis. While the physical and psychological benefits of the sport are proven to reduce numerous ailments including heart disease and depression, runners continuously battle nagging injuries. 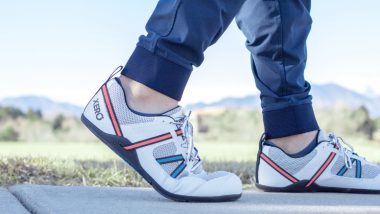 More than 40 million Americans run on a regular basis. While the physical and psychological benefits of the sport are proven to reduce numerous ailments including heart disease and depression, runners continuously battle nagging injuries. The runner’s dictionary of injuries: plantar fasciitis, runner’s knee, IT band syndrome, shin splints, achilles tendonitis, stress fractures; affect 50% of casual runners and 80% of marathoners each year. This statistic has held steady for approximately 50 years despite the introduction of the modern running shoe that includes ever new forms of padding, arch support, and motion control.

So, how should runners reconcile the claims from shoe companies with the unchanging data about running injuries? Do the bold marketing claims from big shoe companies hold any water when it comes to injury reduction and prevention? And are there any other options worth considering for runners who wish to enjoy this healthy pastime?

More importantly, the total injury rate during the study was 22.22% -- 50 of the 226 -- a figure that may not lead runners to think “safety” when it comes to their shoes. If over 22% of runners were injured in the 12-week study, what would happen over more time? Would more runners get injured depending on the shoe used? It’s worth noting that while Nike claimed that the study was independent, parts of it were designed by and paid for by Nike directly.

Dr. Irene Davis, Founding Director of the Spaulding National Running Center and a professor of physical medicine and rehabilitation at the Harvard Medical School studies the history of human movement and anatomy. Her research dives into the evolution of the modern shoe. She claims that early footwear, with archeological dates going back 10,000 years, were simply meant to protect the bottom of feet from the cold and rough terrain as humans hunted and gathered over long distances. The minimalist design encouraged the foot to land naturally. However, the new technology and footwear that’s only been around for the last 50 years has disrupted the foot’s ability to achieve natural movement.

“The foot has 26 bones. It has 33 articulations or joints, each with six degrees of freedom of movement. We have four layers of arch muscles and that complexity is purposeful because the foot has to function as our base of support, a mobile adapter to uneven terrain. It has to be spring-like at times. It has to be rigid at times. When you take that foot and encase it in these very rigid shoes, which I’ll call coffins, the foot then loses its ability to function in the way that it was adapted. I see this in the clinic all the time.” said Davis. “We’ve lulled ourselves into thinking our feet need cushioning and support to survive and to withstand the loads of walking and running.”

Evolutionarily, the human foot reacts more positively to a runner that can feel the natural movement of their feet and bodies and respond accordingly. Xero Shoes, a small Colorado footwear brand, pioneered an entire line of shoes, boots and sandals, designed to promote the foundational idea of natural movement.

Sashen suggests that if the injury reduction produced by the React Infinity came from reducing some of the “protective features” common to modern running shoes, eliminating those features and reverting to a footwear design could produce even more dramatic results.

“Personally, I was constantly injured when I ran,” said Xero Shoes co-founder Steven Sashen. “Once I stopped wearing modern running shoes from these big shoe conglomerates, my running form changed, injuries went away, and my performance improved.” Sashen is a Masters All-American sprinter -- one of the fastest men over 55 in the country. His experience led Sashen “to create footwear that was more like what humans have used for at least 99.5% of human history. In short, less can be more.”

Similarly research from Dr. Stephen Perry showed how adding arch support to the shoes of healthy athletes reduced foot strength in as little as 12 weeks. Dr. Christine Pollard’s research showed that, contrary to our intuition that we need protection from the forces running can put through the body, the extra cushioning in many modern running shoes doesn’t reduce impact forces. This was also shown by Harvard’s Dr. Daniel Lieberman, whose research showed that getting rid footwear all together and running in bare feet eliminated the rapid “impact transient force” that he suggests lead to many running injuries.