From Toyota Hilux to Skoda Kodiaq facelift, here are the upcoming cars that are expected to be launched in 2022. 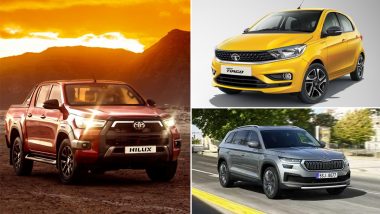 The year 2022 is just around the corner, and we can't wait to welcome it. The year 2022 will mark new beginnings for the auto industry with a hope to see positive momentum, which will be majorly driven by new car launches. Like 2021, we expect to see some big launches happening in the coming year. With so much on the cards, we list down the cars expected to debut in India in 2022. Year Ender 2021: Top 5 Cars Launched in India This Year.

Toyota, the Japanese carmaker is planning to launch the Hilux pickup truck. Ahead of its debut, the Hilux pickup truck has been spotted at a dealer's yard in Nagaland with LED headlights, dark alloy wheels, chrome around the grille and ORVMs. The Hilux truck could come with two engine options - a 2.4-litre and a 2.8-litre diesel. Both engine units might be available with a choice of a 6-speed manual and automatic transmission. Toyota Hilux is likely to be priced between Rs 20 lakh and Rs 25 lakh.

Tata Motors is expected to launch CNG models of Tigor and Tiago in India next month. Tigor and Tiago's test mules were also reportedly spotted on the road. Both Tigor CNG & Tiago CNG will come with a factory-fitted CNG kit along with a 1.2-litre three-cylinder engine that will produce 85bhp of power and 113Nm of peak torque. Both CNG Tata Tiago CNG and Tata Tigor CNG are said to go on sale next month.

The Audi Q7 facelift is speculated to return to the Indian market in January 2022. Under the hood, the new model is likely to be equipped with a 3.0-litre turbo petrol engine, instead of diesel engine options, coupled with 8-speed automatic transmission. The engine will be able to produce 335bhp of power and 500Nm of peak torque.

Skoda is also set to bring the facelifted version of the Kodiaq next month, most probably on January 10, 2022. The company is said to discard the diesel engine from the old model and put a 2.0-litre turbo petrol machine, which will generate 190PS of power and 320Nm of torque. The engine will be mated with a 7-speed DSG. The Kodiaq facelift will sport revised headlamps, bumper and tail-lamps. On the inside, it is said to come with a similar dashboard design as that of the pre-facelifted model.

(The above story first appeared on LatestLY on Dec 30, 2021 02:16 PM IST. For more news and updates on politics, world, sports, entertainment and lifestyle, log on to our website latestly.com).