Lagaan and Apur Sansar find a place in Vulture's 101 movie endings in the history list. Lagaan's ending was of a perfect sixer and also a perfect ending to a rousing moment. Emotions go wild in that scene as we just love an eclectic finish. Apur Sansar breaks away from its melancholic theme to embrace happiness in the last scene. 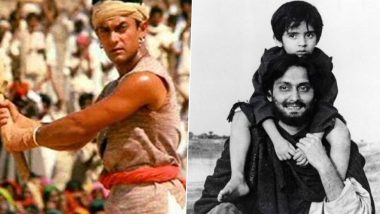 Our hearts are filled with pride to know that Lagaan and Apur Sansar have been featured in Vulture's 101 greatest endings in the movie history list. It has titles like Some Like It Hot, Korean film Mother and many more. Lagaan takes the 90th spot while Satyajit Ray's Apur Sansar is on number 41. The format in which the list was formed was that the deciders went for one film per director so that everybody gets space. The article reads, "We prioritized a diversity of tone, origin, authorship, subject matter, and genre. And we were a bit flexible on what constituted an actual “ending”: a final shot, a final passage; it just had to come at the end of the film." More importantly, they put together names based on the movie endings that stuck a chord with the members of Vulture's staff. Ashutosh Gowariker Birthday Special: 11 Standout Scenes From Lagaan and Swades Director’s Remarkable Filmography – Watch Videos (LatestLY Exclusive)

Apur Sansar, one from Satyajit Ray's biggest contributions to world cinema Apu Trilogy, continues with the theme of loss. A father who couldn't bear to look at his son after his wife dies during childbirth returns to meet him after many years. There's pain, anguish, agony, loss, hurt, and a crafty ending that gives closure in such a heartwarming way. No wonder that it finds a place in this list.

Who doesn't remember the winning sixer on the last ball by Aamir Khan? Lagaan with all its flaws is very precious and special to us. The marriage of two diverse yet most loved genres of India, Bollywood and cricket, has been very meticulously handled here. Vulture quotes a staffer saying, "At the big game, everything comes down to the final ball, at which point we get flashbacks to pivotal moments earlier in the film, at least two fake-outs where it seems like all is lost, and a generous helping of slow motion. It plays like gangbusters, of course. I don’t think all movies need to be so shamelessly crowd-pleasing, but I’m very glad this one is."

We are pretty sure you would be wanting to watch these movies again. Well, we got you covered there too. Catch Lagaan on Netflix while Apur Sansar is available on YouTube and Amazon Prime Video.

(The above story first appeared on LatestLY on Feb 23, 2021 01:57 PM IST. For more news and updates on politics, world, sports, entertainment and lifestyle, log on to our website latestly.com).