Ashutosh Gowariker had also returned to acting in Priyanka Chopra's Marathi production, Ventilator, where he played a character similar to his real self. He is yet to announce his next directorial, though there are reports that he is to make an action film with Farhan Akhtar in the lead. 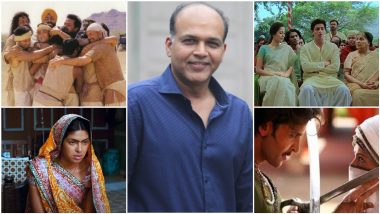 You can argue that Ashutosh Gowariker's glory days might be behind, but one spark is enough to bring back that raging fire. And let's not forget, he gave Indian cinema two of its best films in the Oscar-nominated Lagaan and way-ahead-of-its-time Swades. To some extent, Jodhaa Akbar, even in its period glory, was also reminiscent of an India that was far away from the divisive politics that even affects the matters of the heart, with its inter-religious love story. Ashutosh Gowariker Approached by a Hollywood Studio to Direct a Musical Next?

Ashutosh Gowariker had begun his movie career as an actor with Ketan Mehta's 1983 social drama Holi, where he shared screen with his future Lagaan lead and producer, Aamir Khan. After a decent stint in acting with films like Salim Langde Pe Mat Ro, Indrajeet, Kabhi Haan Kabhi Na, Chamatkar, Jaanam and in tv series like Bharat Ek Khoj, Indradhanush (where a young Karan Johar and Urmila Matondkar were his co-stars), Circus (Shah Rukh's association with him runs long like with Aamir), CID etc.

Ashutosh made his directorial debut in 1993 with the mystery thriller, Pehla Nasha, starring Deepak Tijori, Raveena Tandon and Pooja Bhatt in the lead. The remake of the Hollywood thriller, Body Double, Pehla Nasha was a flop at the box office. His second film, Baazi, starring Aamir Khan as a cop, also failed to work at the box office, though it is memorable for a song sequence featuring Aamir in a drag! Ashutosh Gowariker Birthday Special: From Pehla Nasha to Lagaan to Mohenjo Daro, Ranking All the Films He Directed From WORST to BEST!

It took six more years for Ashutosh to return as a director, and his comeback story is one for the ages. Lagaan was a golden chapter in Bollywood cinema, and was one of 2001's biggest hits. But of course, its biggest distinction was getting nominated for the Best Picture in a Foreign Language at the Oscars (though it lost to No Man's Land). Swades, Ashutosh's much anticipated venture after Lagaan, didn't work well at the box office, though now it is his most talked-about film. Gowariker earned back his box office formwith Jodha Akbar, though it has been a downward spiral for him after that. Panipat, his last Bollywood film that came out in 2019, was one of his biggest letdowns, but like we have pointed out in our review, it is not essentially a bad movie. At least, not as bad as Mohenjo Daro.

For the writer of this article, the best and the most exhilarating in Lagaan was when the 'untouchable' Kachchra (Aditya Lakhia), battling against all odds and doubts, took an unexpected hattrick, thereby giving Bhuvan (Aamir Khan) his first real victory of his convictions. The sweet sight of his ball turning and hitting wickets in the first ball is just... pleasing to both the eyes and the ears.

The scene where Captain Russell (Arrow's Paul Blackthorne) challenges Bhuvan for a cricket match is just cinematic brilliance, the way it has been shot and edited, with AR Rahman's pulsating music adding up the tense factor. Also those who watched Lagaan FDFS without knowing the cricket plotline (trailers did a smart job of hiding it) would have been surprised by this scene.

Of course, a list of Gowariker's best scenes also featuring Lagaan would be meaningless if we do not mention that victory snatching six, which again is brilliantly executed and edited. Especially the scene of Bhuvan falling on his knees while throwing his hands up in the air after pulling off the near-impossible.

An Earthen Cup of Water That Brought Tears

Swades features one of Shah Rukh Khan's best acted moments -  there's another coming soon -  that doesn't even have him speak anything. Instead his eyes are enough to show his internal anguish on seeing the pitiable condition real 'India' is living in. Who knew a little cup of water could bring in so much tears?

Revisiting the scene in the present times, I wonder how many sedition cases Shah Rukh Khan and Gowariker would have faced if Swades would have come out today. Or for the matter, would Swades be even released today? Food for thought?

Only For the Cameos

Pehla Nasha is a very average remake of a cult Hollywood movie, but it is most remembered for its opening scene. A dream sequence, it has the protagonist being cheered at the premiere of his debut movie, as he is showered loquacious praises by Shah Rukh Khan, Aamir Khan and Saif Ali Khan - the only time in Bollywood we get to see these three Khans in one frame together. Also, Rahul Roy and Sudesh Berry are present too.

More than a historical drama, Jodhaa Akbar is a love story between Emperor Akbar (Hrithik Roshan) and his Hindu queen Jodha Bai (Aishwarya Rai Bachchan). Their blow-hot-blow-cold romance has plenty of interesting moments, but nothing stands out as the scene where they have a sword-play that pours out their anger, annoyance, playfulness, and even passion.

Before Sanjay Leela Bhansali made it his trademark, Gowariker depicted how to show opulence and majesty in one of his best and most elaborate choreographed song sequences in Jodhaa Akbar, with due credit to Chinni Prakash with using about 400 dancers, as well as the costume designers and art designers.

Watch the song below:

Khelein Hum Jee Jaan Sey, based on the Chittagong Uprising of 1930, is considered as one of Gowariker's weaker efforts, especially when pitted against Bedabrata Pain's more powerful and sadly, more underrated Chittagong. That said, there are a couple of scenes that stand out in Gowariker's film, the most evocative being the scene where some of the kids in Surya Sen's (Abhishek Bachchan) army are being chased by the British police, a few of them being shot down, and a couple who escapes kills themselves to get out of their helpless situation.

What's Your Raashee?, Ashutosh Gowariker's attempt at making a romcom, could have been bearable if it wasn't three and a half hours long, with back-to-back songs! Getting to see Priyanka Chopra in 12 different roles - based on zodiac signs - felt more like a gimmick in the end, but the actress hardly disappointed (paired opposite her-then boyfriend Harman Baweja). Her best scene in the film is as Jhankana, a potential bride for its male protagonist, who turns out be merely a teenagar with piggtails, whose family wants her to get married off soon to get them out of financial straits. The "Koi Jaane Na" track that plays along the scene adds more depth to the tragedy of the whole scene.

In an era where Bhagwan Shri Ram's legacy has unfortunately been dragged into what's nothing but divisive politics being played in the name of religion, let's remind you of this song sequence from Swades that is about the same deity, which came in what feels like a distant but more tolerant time. It comes from a movie made by a Hindu, features in a song composed by a convert Muslim, lyrics are written by an atheist-but-born Muslim and features a devout Muslim superstar. What's more unity-in-diversity in Bollywood than this?

Ashutosh Gowariker had also returned to acting in Priyanka Chopra's Marathi production, Ventilator, where he played a character similar to his real self. He is yet to announce his next directorial, though there are reports that he is to make an action film with Farhan Akhtar in the lead.

(The above story first appeared on LatestLY on Feb 15, 2021 03:21 PM IST. For more news and updates on politics, world, sports, entertainment and lifestyle, log on to our website latestly.com).