In an interview with a leading portal, Arjun Kapoor has cited clearly how these trolls don’t bother him. The actor who is in a relationship with Malaika Arora stated, "What I do in my personal life is my prerogative." 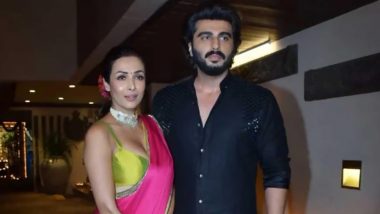 Arjun Kapoor and Malaika Arora have been dating each other for a few years. Ever since the two made their relationship official on social media, there are rumours about them taking their relationship to the next level. However, the neither of them have ever commented anything about it. Apart from that, Arjun (36) and Malaika (48) get trolled for the age gap between them. There’s a difference of 12 years between the couple, however, age is really not a bar for the duo. Malaika Arora Shares a Pouty Picture With Arjun Kapoor, Says ‘I Miss You Mr Pouty’.

In an interview with a leading portal, Arjun Kapoor has cited clearly how these trolls don’t bother him. He was quoted as saying, “Firstly, I think that the media is the one who goes through the comments from people. We don’t even look at 90% of it so the trolling cannot be given so much importance, because it’s all fake. Those same people will be dying to take a selfie with me when they meet me, so you cannot believe that narrative,” reports Masala.com. Arjun Kapoor Shares A Glimpse Of The Romantic Date Night With Girlfriend Malaika Arora During Their Maldives Vacay (Watch Video).

Arjun Kapoor further stated, “What I do in my personal life is my prerogative. As long as my work is being recognised, the rest is all just a lot of noise. Plus, you can’t be so bothered about whose age is what, so we should just live, let live and move on. I think it’s a silly thought process to look at age and contextualise a relationship.”

On the work front, Arjun Kapoor was last seen in Bhoot Police that premiered on Disney+ Hotstar. Ek Villain Returns and Kuttey are his upcoming projects.

(The above story first appeared on LatestLY on Jan 04, 2022 05:37 PM IST. For more news and updates on politics, world, sports, entertainment and lifestyle, log on to our website latestly.com).