Cirkus: A Goofy Ranveer Singh Is Elated to Be Directed by Rohit Shetty in the New Still From the Sets of the Film (View Pic)

The still shows a goofy Ranveer jumping with joy as director Rohit Shetty gives a serious look in the picture. Ranveer is dressed quite differently as well. 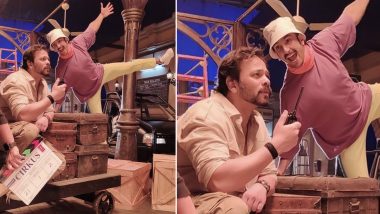 Ranveer Singh and Rohit Shetty are a deadly combination and we all know we are in for some serious fun when the two collaborate. Shetty's film with Ranveer titled Simmba was a massive hit and it has now raised the anticipation for their next film titled Cirkus. Ranveer began shooting for the film very recently and posted a picture from the sets of the film. While one could only see his side profile in the pictures, fans were elated to see that the actor is back to work. Ranveer Singh Shares a Sneak Peek of His Look As He Starts Shooting for Rohit Shetty’s Cirkus.

Now a new still from the sets of Rohit Shetty's film is making rounds. The still shows a goofy Ranveer jumping with joy as director Rohit Shetty gives a serious look in the picture. Ranveer is dressed quite differently as well. He is seen wearing a pink t-shirt paired with ochre-coloured pants. He also had a fisher hat added to the look. One can also see a car, some vintage boxes making us wonder what scene the two were going to shoot.

Cirkus is said to be based on William Shakespeare's play The Comedy Of Errors. Apart from Ranveer, the cast includes Pooja Hegde, Jacqueline Fernandez, Varun Sharma, Siddhartha Jadhav, Johnny Lever, Sanjay Mishra as well. Cirkus is reportedly being shot in Goa and Ooty and it is expected to go on at a stretch until March next year. Cirkus: Is Ranveer Singh’s Film With Rohit Shetty Set In The ’60s?

Besides Cirkus, Ranveer Singh has many other projects lined-up. The release of his films ’83 and a special appearance in Sooryavanshi are awaited. Jayeshbhai Jordaar is another film he has in his kitty and also a film with Karan Johar. Ranveer is also in talks with Ali Abbas Zafar for a sci-fi superhero film and with Gully Boy director Zoya Akhtar for a gangster drama. The fourth instalment of Dhoom is also likely to feature Ranveer Singh.

(The above story first appeared on LatestLY on Dec 28, 2020 08:53 PM IST. For more news and updates on politics, world, sports, entertainment and lifestyle, log on to our website latestly.com).