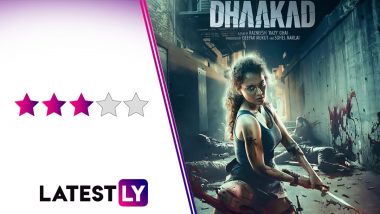 Dhaakad Movie Review: Director Razneesh Ghai's Dhaakad places Kangana Ranaut on the pedestal- that of a demigod (read: goddess) the one that spells death in one swift stroke. Ranaut is absolute fire, who justifies her field name Agni, with total panache. She stops at nothing and she strictly means business! She also acquires guns and glory along the way. She slings deadly weapons across her mighty shoulders and throws some solid punches to bring down her nemesis. In that sense, she truly embodies the force and the strength that galvanizes the spirit. Dhaakad Review: Netizens Declare Kangana Ranaut’s Agni As ‘One of the Most Iconic Characters’

Those who have seen the trailer know already that Kangy plays an exquisitely trained and deadly field agent Agni. The ever-so-dependable killing machine is entrusted with a deadly mission of gathering and eventually eliminating the internationally notorious human and ammunition trafficker Rudraveer (played by Arjun Rampal) who has remained off the radar for more than a decade.

Shot masterfully and mounted handsomely, Dhaakad is impressive as it manages to score high not only on the performance scale but also wins you over as it excels in the technology department. The sleek cinematography (replete with neon-lit action sequences). the sharp costumes and the unmatched action sequences make this one an engaging watch. But even at 2 hours 10 minutes, the film seems long and a tad bit boring because of the repetitive narration of certain sequences done in a mind-numbing fashion. The Kapil Sharma Show: Kangana Ranaut Takes a Dig at Ananya Panday; Explains What ‘Bollywood Bimbo’ Means (Watch Video)

Going beyond the Charlize Theron-esque avatar of Atomic Blonde, Kangana's Agni scores high on weapon-wielding. So much so that you are willing to go beyond the caricaturish hairdo and the costumes donned. The makers intertwine the brutal past of the key characters and how the desire for vengeance comes to the fore with the action drama. While Arjun Rampal gives his best to play the menacing character, it is Divya Dutta who shines the most as a brothel owner (which Agni tries to infiltrate). Dutta adds much substance and lends a solid support to the narrative. Unfortunately, the same can't be said about Sharib Hashmi and Swastika Chatterjee who are criminally wasted thanks to sloppy writing. Dhaakad: Kangana Ranaut Visits Tirupati Balaji Ahead Of Her Film’s Release, Says ‘Feeling Blessed After Divine Darshana’ (View Pics)

What also works for Dhaakad is the excellent action choreography and the brilliant camerawork (by Tetsuo Nagata). However, on the down side, the film demanded some serious writing and the dire need to flesh out the key characters more effectively. The makers have sincerely attempted to create a dark universe of their own, but the hurriedly crafted sequences without much cohesion and synchronicity let the film down.

Dhaakad doesn't dare to go beyond the usual troupes of action thrillers but is entertaining nevertheless. Kangana leads from the front and goes all out with all guns blazing with utmost sincerity, (unfortunately) with a storyline that doesn't quite pack a solid punch!

(The above story first appeared on LatestLY on May 20, 2022 11:54 AM IST. For more news and updates on politics, world, sports, entertainment and lifestyle, log on to our website latestly.com).